Makar Sankranti marks the transition of the sun into the zodiacal sign of Makara (Capricorn) on its celestial path. 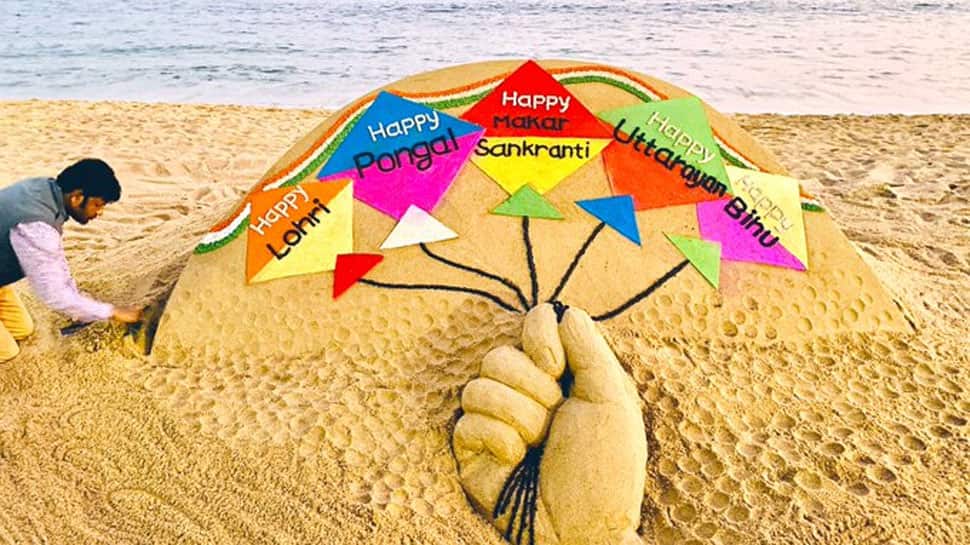 New Delhi: On the auspcious occasion of Makar Sankranti (January 15), Pongal, Bihu, Uttarayan, renowned sand artiste shared hsi colourful sand art creation on Twitter. He wished fans and followers with a beautiful message which can be inspiring for readers.

Sudarsan Pattnaik wrote: Namaskar! May these festivals bring in new hopes, prosperity and good harvest in your lives. #HappyMakarSankranti

Namaskar! May these festivals bring in new hopes, prosperity and good harvest in your lives. #HappyMakarSankranti  pic.twitter.com/0L6NdDQ3qZ

Makar Sankranti marks the transition of the sun into the zodiacal sign of Makara (Capricorn) on its celestial path. It happens to be the first change in the zodiac after the winter solstice. Surya Dev or Sun God is worshipped on this day.

As India is home to diverse cultures, the same festivals are known and celebrated differently pan country. Similarly, Makar Sankranti is known by different names in the country. If Northern belt calls it Makar Sankranti or Maghi, then in Maharashtra it is called Pedda Pandaga, in Magh Bihu in Assam, Poush Sankranti in West Bengal and Pongal (Thai Pongal) in Tamil Nadu, Uttarayan in Gujarat respectively.

On Makar Sankranti, fairs or melas are organised where social and cultural activities take place. Children take part in kite-flying competitions, bonfires and delicious food stalls dominate the festival. Usually, Makar Sankranti is celebrated on January 14 but sometimes due to the transition in Sun (Surya) position, it falls a day later, i.e January 15 respectively.

Bhubaneswar-based Sudarsan Pattnaik was honoured with the Padma Shri award in 2014.

Pattnaik in 2017 created a Guinness World Record for building the world's tallest sandcastle ever at Puri beach in Odisha, Bhubaneswar.