Payal Rohtagi takes a dig at Bigg Boss 13 contestants, gets trolled for her comment—Read inside

Payal Rohtagi, who was a part of season 2 of Bigg Boss took a dig at the contestants of this year but Twitterati had different concerns.

New Delhi: One of the most controversial, entertaining and popular shows of Indian television, 'Bigg Boss' kick-started its season 13 with a grand premiere on September 29. The show, hosted by Salman Khan, has celebrities locked up in a house full of cameras. Unlike previous seasons, there are no commoners in the Bigg Boss house this time.

Popular faces of the entertainment industry like Ameesha Patel, Koena Mitra, Siddharth Shukla, Rashami Desai, and Abu Malik are a part of the show this year. While Ameesha is the 'Maalkin' of the house, others are contestants.

Payal Rohtagi, who was a part of season 2 of Bigg Boss took a dig at the contestants of this year and wrote on Twitter, “Ram Ram ji Actors like #AmeeshaPatel #Koenamitra #RashmiDesai #SidarthShukla #AbuMalik all r #Jobless at present So they decided to do #BiggBoss13 for money. Others are irrelevant who just need fame so must have come free of cost. I was also #Jobless when I went to BB2”

However, the Twitterati had different concerns.

Take a look at some reactions here: 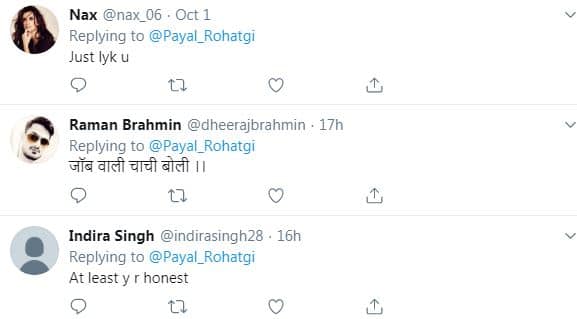 Payal was a part of season 2 of Bigg Boss which was hosted by Shilpa Shetty.

'Bigg Boss' season 2 aired its finale on 22 November 2008 and Ashutosh Kaushik emerged as the winner.