Nick Jonas shared a picture with Priyanka Chopra, Kevin and Danielle, Joe and Sophie Turner and younger brother Frankie from last year's BBQ party and wrote, "Last year at our 4th of July bbq. Hope everyone is having a great day."

New Delhi: In 2018, pictures of Priyanka Chopra and Nick Jonas from 4th of July (American Independence Day) celebrations trended a great deal. The now-married couple was at that time rumoured to be dating and netizens just wanted to get a glimpse of Priyanka and Nick from the celebrations.

A year later, on July 4, Priyanka and Nick both posted memories from 2018's celebrations and it looks like so much fun, guys!

Nick shared a picture with Priyanka, Kevin and Danielle, Joe and Sophie Turner and younger brother Frankie from last year's BBQ party and wrote, "Last year at our 4th of July bbq. Hope everyone is having a great day. #family."

Last year at our 4th of July bbq. Hope everyone is having a great day. #family

While Priyanka posted a loved-up picture of herself with Nick and wrote, "Happy 4th of July, America. Thank you for being so generous to me and all of mine. Have fun and be safe everyone. #throwback #oneyearago." 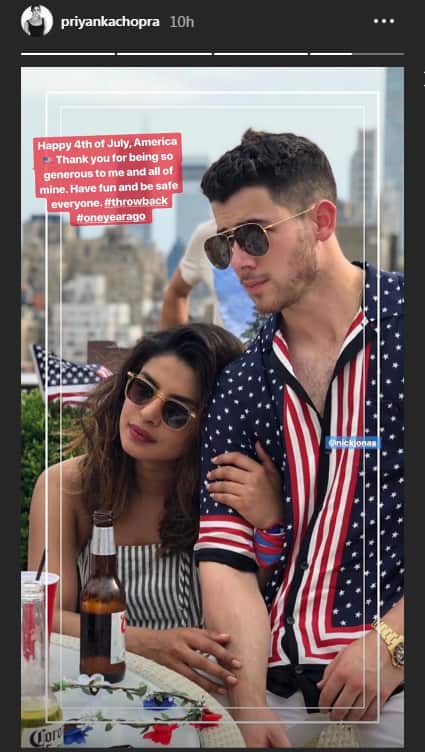 Priyanka and Nick first met in 2017 at the Met Gala but they started dating in 2018. They got engaged in a traditional roka ceremony in Mumbai in August and married in Jodhpur in December.

As of now, the star couple is in Italy and here's a picture of them from the vacation.

Via Dell Amore... or Love Way in other words.

All this while, the Jonas' were busy with Joe and Sophie's wedding, which happened earlier this week in France. First picture from the lavish wedding ceremony was shared on Thursday by the newly-weds.

Priyanka, on the professional front, will be next seen in Bollywood film 'The Sky Is Pink', which will also star Farhan Akhtar and Zaira Wasim, the 'Dangal' actress who recently announced her disassociation from movies.