She is a known face in fashion circuits and is quite an avid social media user.

New Delhi: Bollywood's blue-eyed boy Ranbir Kapoor and model-actress Elena Fernandes have shot for a commercial together. The advertisement clipping was shared by Elena on her Instagram account and we must say the new pairing looks minty fresh.

The stunning Elena shared a selfie with the nation's heartthrob and put it up on her Insta story.

Check out the screen grab: 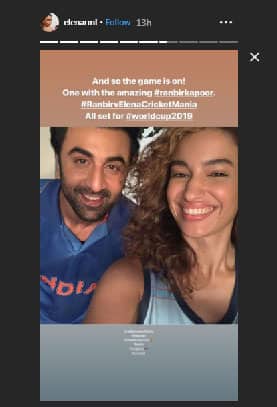 The two can be seen cheering for their favourite teams—India and England respectively in the ICC cricket World Cup 2019. Model-actress Elena grew up in London and is born to an American mother and Indian father.

She is a known face in fashion circuits and is quite an avid social media user.

Ranbir, on the work front, is looking forward to the release of 'Brahmastra'. The film is currently being shot in Varanasi and stars Alia Bhatt in the lead role. It is being helmed by Ayan Mukerji and is backed by Dharma Productions.

The film also stars Amitabh Bachchan and Mouni Roy in pivotal parts. The film has been pushed for release 2020.

Ranbir's last outing 'Sanju', a biopic on superstar Sanjay Dutt was a huge success at the Box Office and earned his Filmfare Best Actor trophy besides several awards and accolades.