Ranveer Singh in awe of beautiful landscape on sets of '83, shares BTS pic

Giving fans a glimpse of the beautiful picturesque landscape and cloudy weather along with a rainbow, Ranveer Singh can be seen standing on the ground and enjoying the heavenly vision.

New Delhi: Bollywood's handsome hunk Ranveer Singh who is in London for the shooting of his upcoming film '83', shared a behind-the-scene-picture from the sets of the movie.

Giving fans a glimpse of the beautiful picturesque landscape and cloudy weather along with a rainbow, the 34-year-old actor can be seen standing on the ground and enjoying the heavenly vision. 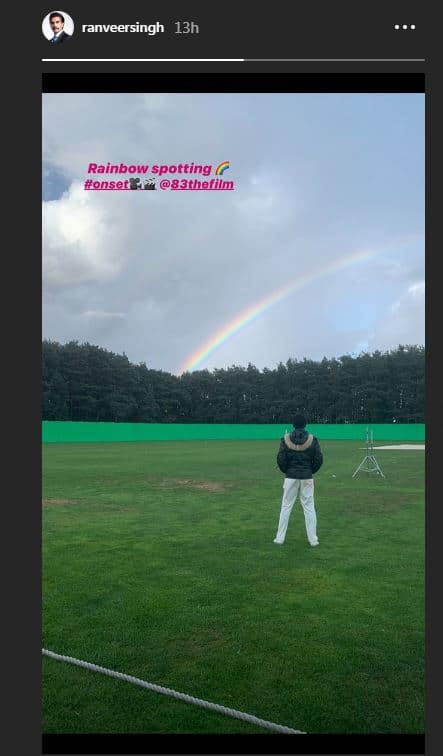 The actor keeps his fans updated by posting pictures from the sets. Recently, he greeted a guest on the sets of the film to talk about work.

The guest was none other than 'little master' Sunil Gavaskar who visited the team in England. Sharing a happy picture of the team with the guest on Instagram, film's director Kabir Khan wrote, "The little master came to see us play cricket in England".

Earlier, the 'Gully Boy' actor who is prepping up hard for his role had shared pictures and video that showed sweating him out in a gym and practising on a cricket pitch in the picturesque town of Dharamshala in Himachal Pradesh.

The clip also featured him training with Kapil, who was the captain during India's 1983 World Cup win.

'83' is based on Kapil Dev, who lifted the World Cup for India in 1983 and also coached the team from October 1999 to August 2000. It also features R Badree, Hardy Sandhu, Chirag Patil, Saqib Saleem, Pankaj Tripathi, Tahir, Ammy Virk, and Saahil Khattar as the Men in Blue.

Interestingly, his real-life wife Deepika Padukone will also feature in the film and will essay the role of his reel wife.