Charlie's Angels #familyportrait," Ananya Panday captioned the monochrome pictures. The BFFs can be seen twinning in black and Suhana Khan is sandwiched between Ananya and Shanaya Kapoor 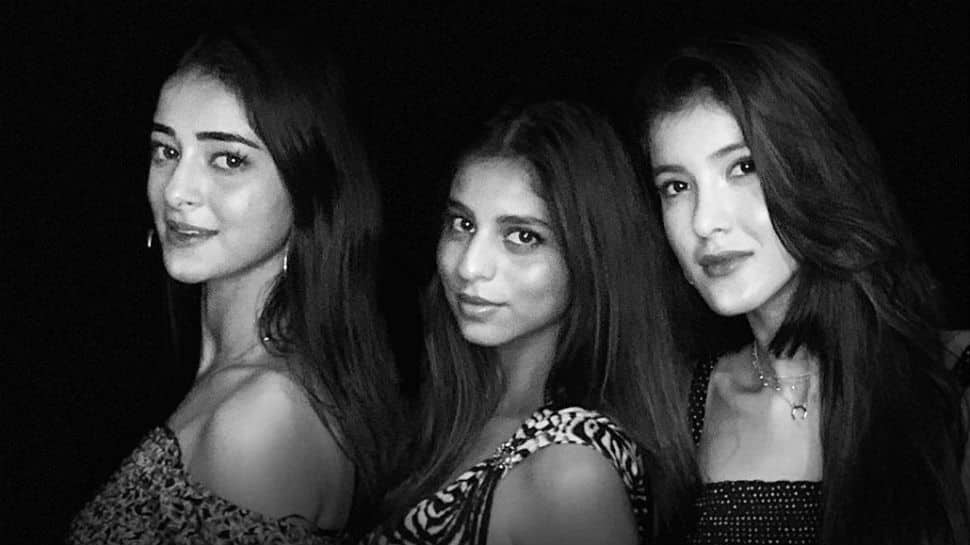 New Delhi: Actress Ananya Panday, who is best friends with Shah Rukh Khan's daughter Suhana and Sanjay Kapoor's daughter Shanaya, shared lovely pictures of the trio recently. The pictures are all the more special as they have been clicked by Shah Rukh.

"Charlie's Angels #familyportrait," Ananya captioned the monochrome pictures. The BFFs can be seen twinning in black and Suhana is sandwiched between Ananya and Shanaya.

Here are the pictures.

Ananya, Suhana and Shanaya have been friends since childhood. When in Mumbai, the trio are spotted hanging out together most of the times. Also, Ananya's Instagram timeline is full of her pictures with Suhana and Shanaya.

On Suhana's birthday in May, she wished her friend with a throwback picture of the trio playing together.

Take a look at some more pictures of the BFFs.

Happy birthday Sue, we love you

Doesn’t get much better than this  #CharliesAngels

Happy birthday Suhane, have the bestest time (without me and Shano for once) you'll always be my little baby and I love you loads so come back soon  #jamtoast

Ananya debuted as an actress with the May release 'Student Of The Year 2'. She is the daughter of actor Chunky Panday. Meanwhile, Shanaya has also entered Bollywood but not as an actress. She is working as an assistant director for her cousin Janhvi's film.

Suhana, on the hand, aspires to be an actress, SRK revealed earlier. She just graduated from Ardingly College in London.