At the prayer meeting, Shweta and her daughter Navya Naveli broke down while remembering Ritu Nanda while Jaya Bachchan was seen wiping away her tears. 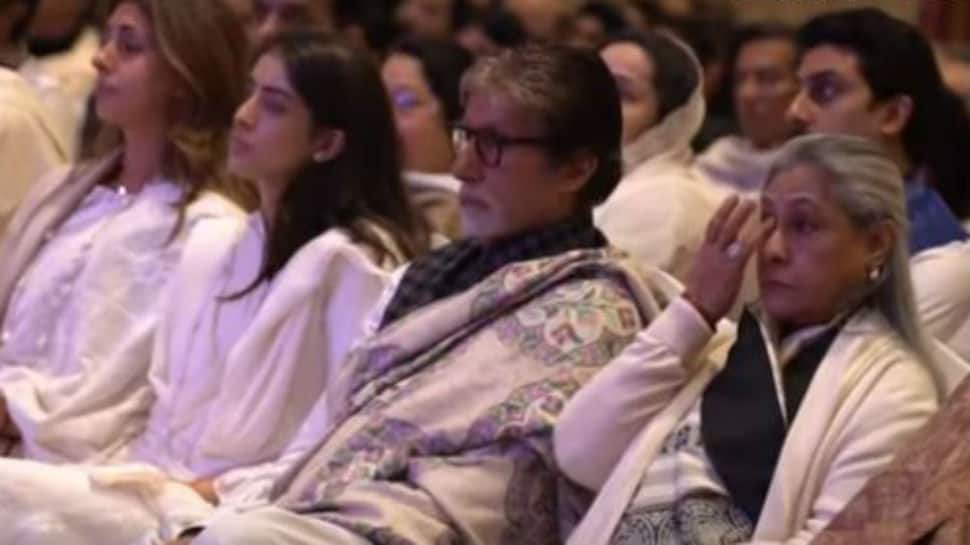 New Delhi: Over the weekend, members of the Nanda, Kapoor and Bachchan families gathered in Delhi to pay their last respects to Ritu Nanda, who died on January 14. Ritu Nanda was late actor-filmmaker Raj Kapoor's elder daughter. She was married to industrialist Rajan Nanda with whom she had two children - Nikhil (married to Shweta Bachchan) and Nitasha.

At the prayer meeting, Shweta and her daughter Navya Naveli broke down while remembering Ritu Nanda while Jaya Bachchan was seen wiping away her tears. Pictures and videos from the prayer meet have been shared by Delhi-based singer Ankit Batra on social media. The song 'Jeena Yahan Marna Yahan' echoed in the hall making everyone very emotional.

Amitabh Bachchan, who had earlier penned a tribute to Ritu Nanda on his blog, delivered a heartwarming speech at the prayer meeting. Her brother Rishi Kapoor also took the dais to fondly remember Ritu Nanda.

Condolence Meet Part1: An ode to Ritu Nanda ji, the entrepreneur daughter of the legend Raj Kapoor, mother in law of Shweta Bachchan Nanda. Words are not enough to pay tribute to this dynamic lady. Heartfelt condolences to the family and prayers for the departed soul. It was overwhelming for me to sing, with moist eyes and heavy Hearts of almost everyone in the gathering, who was present while bidding a farewell to the Legend's daughter. You will always be remembered. "Jeena Yahan Marna Yahan Iske Siva Jaana Kahan"

Other members of the Kapoor family who were part of the prayer meeting were Neetu Kapoor, Randhir Kapoor and wife Babita, Rajiv Kapoor, Rima Jain and husband Manoj Jain and Shammi Kapoor's wife Neila Devi.

Amitabh Bachchan, Jaya and their son Abhishek made sure they were by Shweta and the Nanda family's side. The Bachchans, including Aishwarya Rai, had flown to Delhi after Ritu Nanda's death. Abhishek also accompanied Nikhil, Navya and Agastya (Nikhil and Shweta's son) to Haridwar to immerse her ashes.

Days after Ritu Nanda's death, Shweta shared a picture of herself with her mother-in-law and Navya and wrote, "Will miss you dearly."

Will miss you dearly

Ritu Nanda died of cancer at the age of 71. Her funeral was attended by most of her family members, the Bachchans and the Kapoors.