The fuss around Vaani Kapoor's latest bikini photo - Deets inside

And while praise for the Bollywood stunner started pouring in from all corner, there was a section that trolled the actress mercilessly.

New Delhi: Celebrity fitness trainer Yasmin Karachiwala on Wednesday shared a jaw-dropping picture of Vaani Kapoor in a bikini while complementing the actress for achieving the transformation in 10 weeks. In the photo, the actress flaunted her hourglass svelte figure in a peach bikini against the backdrop of an exotic beach location.

According to Vaani's trainer, she worked out hard for getting that picture-perfect look. From intense training of Pilates to functional work out—she did it all! Yasmin captioned the picture as "It takes 10 weeks of intense training from Pilates to Functional to get a body like this!!"

Love you @yasminkarachiwala!! For being the best trainer and friend one can ever ask for. Thank you for always pushing me to be the best version of myself. __ #Repost @yasminkarachiwala ___ It takes 10 weeks of intense training from Pilates to Functional to get a body like this!! @_vaanikapoor_ on _ in #WAR Check out snippets of her workout in my stories _ #VaaniKapoor #CelebrityTrainer #YasminKarachiwala #fitnessgoals #PilatesChangesLives

And while praise for the Bollywood stunner started pouring in from all corner, there was a section that trolled the actress mercilessly. One user wrote, "Don’t know why it’s looking unsexy,she replaced her curves with muscles which is making her look masculine rather than feminine, women look sexy being voluptuous and curvy not toned and skinny."

Another user felt that her photo had been edited as she wrote, "10 weeks of training and a little photoshop". "She still has a square chin", wrote another user.

Here, we take a look at some of the comments where the trolls tried to take on the actress: 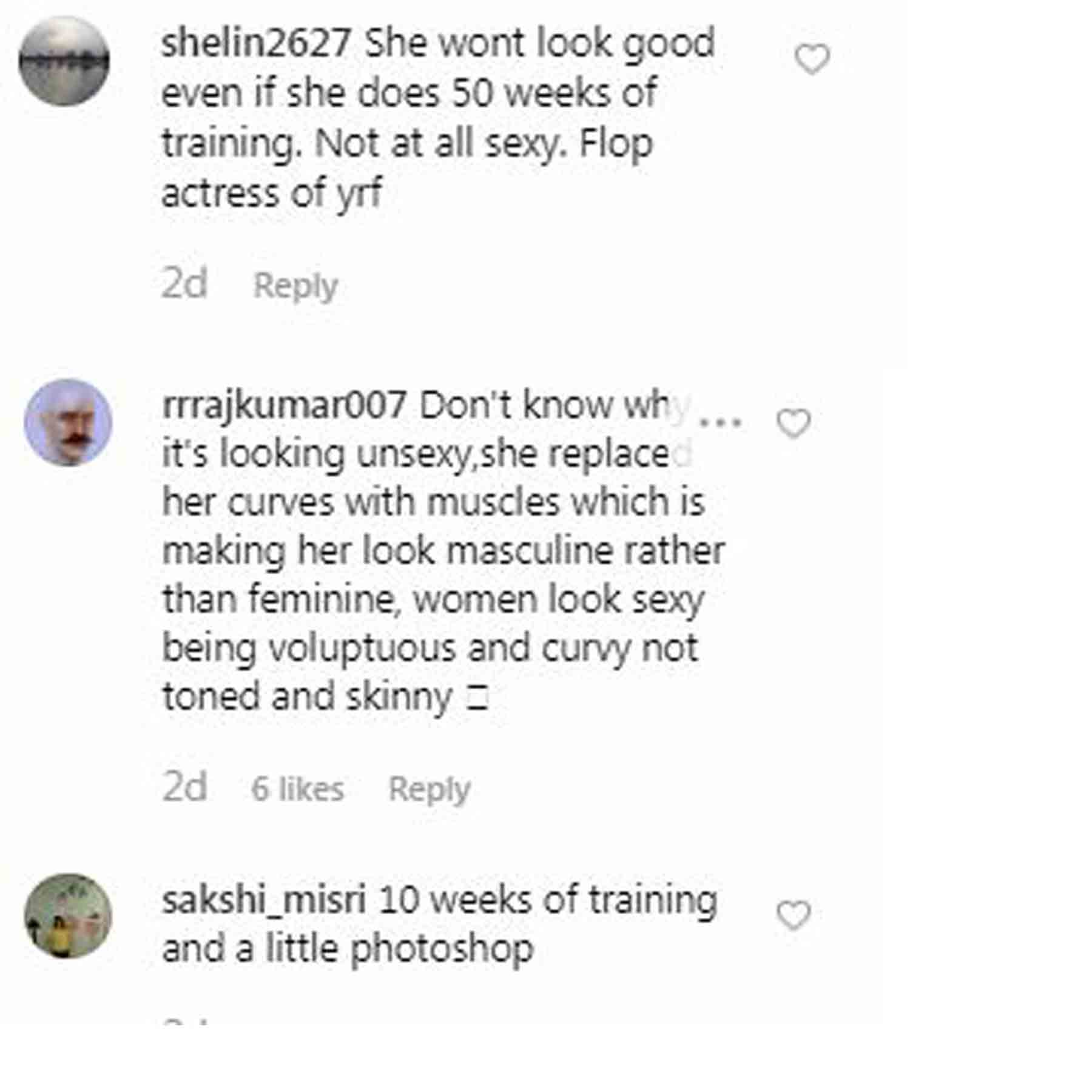 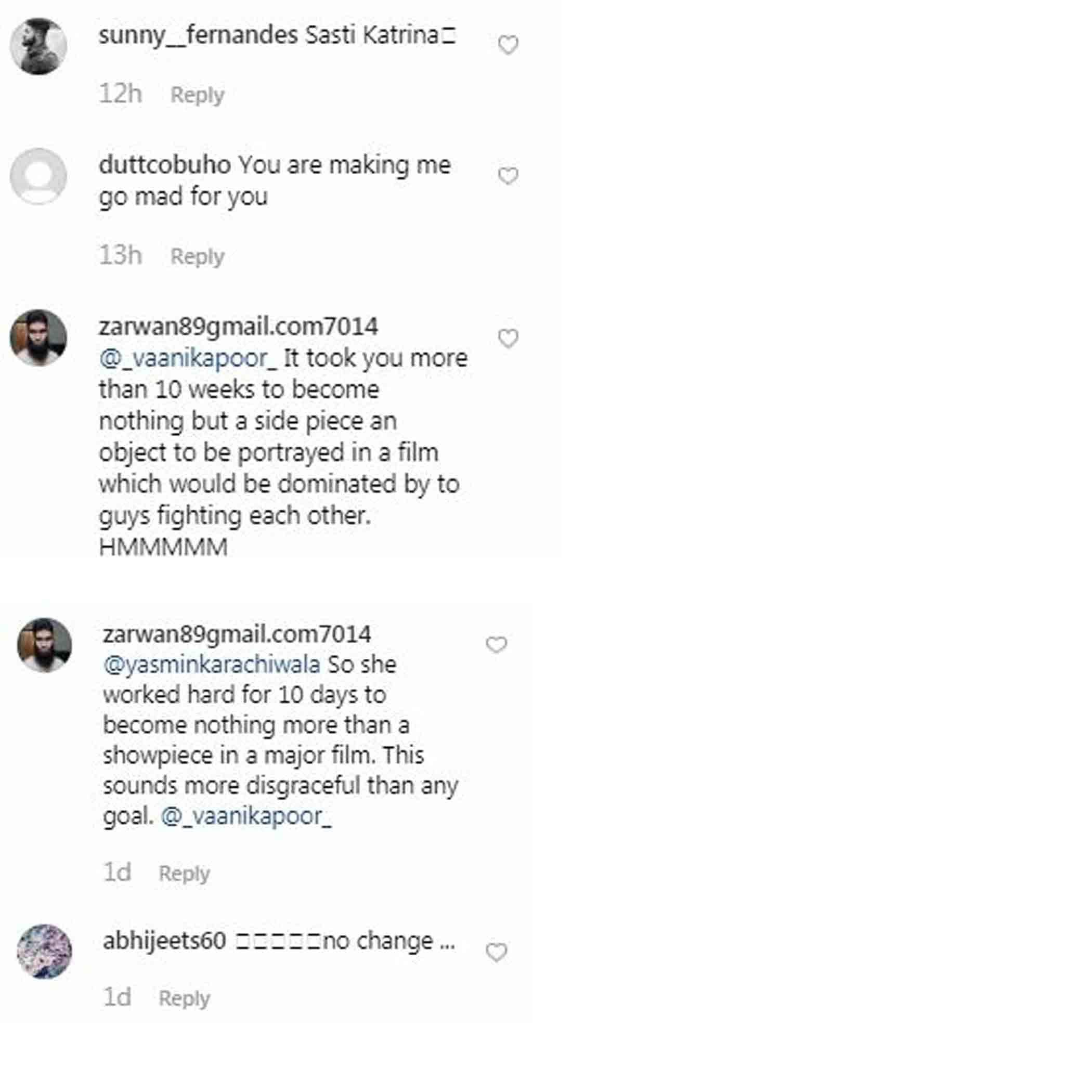 Meanwhile, speaking of her upcoming film 'War', Vaani plays the female protagonist. The film is directed by Siddharth Anand and also features Hrithik Roshan and Tiger Shroff. The film also features Ashutosh Rana, Anupriya Goenka and Dipannita Sharma in supporting roles. The story of the film follows a man who and his guru have a face-off when they get pitted against each other.

The first official teaser of the film released some time back and had both the lead actors performing some high-octane action sequences. 'War' is set to be released on October 2, 2019.

Vaani will also be seen in another action-adventure film 'Shamshera', to be produced by Aditya Chopra's Yash Raj Films. The film also stars Ranbir Kapoor and Sanjay Dutt in lead roles. Set in the 1800s, the film is about a dacoit tribe who take charge in the fight for their rights and independence against the British.

As per reports, Ranbir is playing a double role in the film, as central character Shamshera and his father. Vaani, on the other hand, will be seen as a dancer. Sanjay will be seen as the main antagonist in the film, which will also feature popular television actor Ronit Roy.

Earlier, a report stated that a massive fort for the film was built at Film City, Goregaon in Mumbai, that required two months of preparation and the effort of nearly 300 workers.

The film will release on July 30, 2020, coinciding with the Bakrid holiday weekend.