Nora Fatehi took to Instagram stories recently and shared a pic of herself posing in a golden outfit. Before the picture disappears, we took a screenshot of it.

New Delhi: From 'Dilbar' to 'O Saki Saki', and now her latest release 'Pachtaoge', Nora Fatehi has been trending on YouTube like no other! The Moroccan beauty has a huge fan base with over 6.2 million followers on social media app Instagram.

She is quite active on the photo and video sharing platform and her uploads often go viral. Nora took to Instagram stories recently and shared a pic of herself posing in a golden outfit.

Before the picture disappears, we took a screenshot of it. 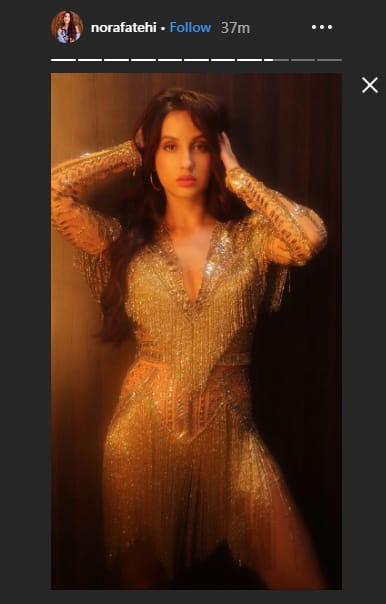 Nora starred opposite John Abraham in the recently released 'Batla House'. The film has received a thumbs up from critics and the audience. It is performing well at the box office and still continues minting money.

The stunner will next be seen in 'Street Dancer 3D' which also stars Varun Dhawan and Shraddha Kapoor. Expectations from the film are soaring high already because Nora is known to be a fantastic dancer and is expected to set the screen ablaze with her dance moves yet again in the Remo D' Souza directorial.