Girish Karnad died after a prolonged illness in Bengaluru on Monday. 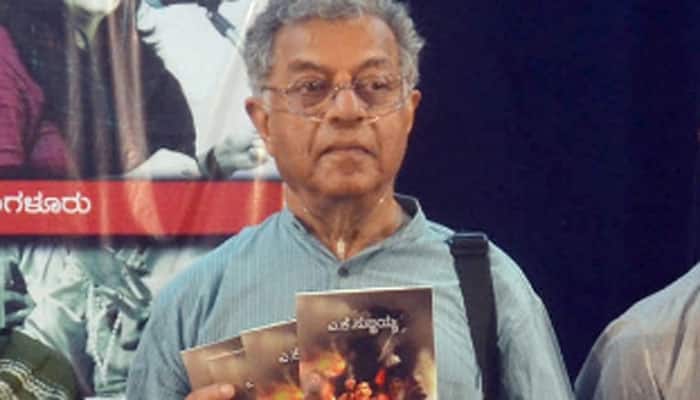 New Delhi: Veteran actor Girish Karnad died after a prolonged illness at his residence in Bengaluru on Monday morning. He was 81.

Karnad worked predominantly in Bollywood and South films. He was a prominent playwright too. 'Tughlaq' and 'Hayavadana' are some of his best-known plays.

He was a recipient of the 1998 Jnanpith Award, the highest literary honour conferred in India.

Karnad was conferred Padma Shri and Padma Bhushan by the Government of India. He had won five Filmfare Awards.

He made his acting and screenwriting debut with the Kannada film 'Samskara' in 1970. The film had won the first President's Golden Lotus Award for Kannada cinema. Some of his famous Kannada films are 'Tabbaliyu Neenade Magane', 'Ondanondu Kaladalli', 'Cheluvi', 'Kaadu' and 'Kanooru Heggaditi'.

He also had TV series 'Malgudi Days' and 'Indradhanush' to his credits.

He served as director of the Film and Television Institute of India (FTII) from 1974 to 1975 and chairman of the Sangeet Natak Akademi, the National Academy of the Performing Arts from 1988–1993.

Karnad was born on May 19, 1938, in Mumbai (then Bombay Presidency). He is survived by his son Raghu, a writer and journalist.

A three-day state mourning has been declared in Karnataka by CM HD Kumaraswamy after Karnad's death and one-day public holiday has also declared.

Three-day state mourning has been declared in Karnataka by CM HD Kumaraswamy after Karnad's death and one-day public holiday has also declared.