Vidya Balan shared posts on Instagram stories where she can be seen waving the LGBTQ rainbow flag along with a video of the Pride Parade where several people thronged the streets of New York.

New Delhi: Vidya Balan who is currently spending time with husband Siddharth Roy Kapur along with family in New York, attended the Pride Parade with excitement and vigour.

The `Tumhari Sulu` actor shared pictures and videos on Instagram stories where she can be seen waving the LGBTQ rainbow flag along with a video of the Pride Parade where several people thronged the streets of New York to celebrate the occasion with great joy. 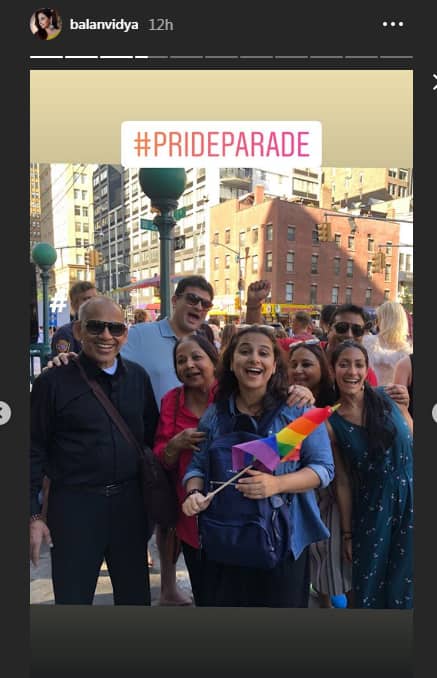 World Pride day took place during the 50th anniversary of the Stonewall riots, considered the catalyst for the modern gay rights movement.

The parade was passed by the Stonewall Inn, the site of the 1969 uprising that saw the LGBTQ community fight back against New York Police Department (NYPD) officers who routinely raided the bar in Greenwich Village.

The Sunday`s march caps off a month of events that included a rally commemorating Stonewall 50, Youth Pride and Pride Island, a three-day outdoor music festival which seems not less than a riots of colours on streets.

On the work front, the actor will be seen in the role of mathematical wizard Shakuntala Devi who earned the moniker `human computer` for her exceptional skills with numbers. The actor will also be seen in `Mission Mangal` where she will be starring along Akshay Kumar, Taapsee Pannu, Sonakshi Sinha, Sharman Joshi, and Nithya Menen.