Woman withdraws sexual harassment complaint against Bhushan Kumar, says it was out of 'frustration'

The woman, in her letter, asked the police officials to withdraw the complaint against the T-Series honcho and said that the allegations were false.

New Delhi: The woman, who accused T-Series head honcho Bhushan Kumar of sexual harassment, has withdrawn her complaint from Mumbai's Oshiwara police station. The girl, who works in T-series, had on Wednesday lodged a complaint against Kumar, alleging that he sexually exploited her in the pretext of giving work.

In her withdrawal complaint, the woman mentioned that she approached the police against Bhushan 'out of frustration and depression' and that her allegations against him are 'malicious'. "I had no such intention to malign his reputation and shall not make any false statement and allegation against him in future," her statement read.

Here's a copy of her withdrawal application which was submitted at the police station on Thursday. 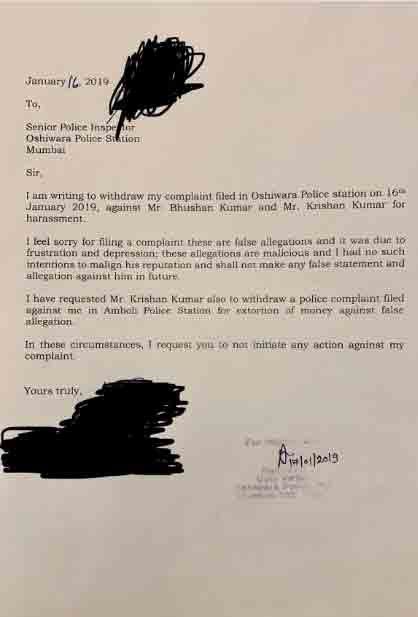 Bharat is the producer of Emraan Hashmi's starrer 'Why Cheat India', which is slated to release on January 18, 2019. He is also producing Salman Khan starrer 'Bharat'.

Yesterday, the woman, who works as an associate at T-Series, had claimed in her complaint that Kumar exploited her sexually on the pretext of getting her work. She claimed that she met Bhushan at the premiere of 'Bhoomi' in 2017 where the two exchanged numbers with each other.

I don't regret anything: Jacqueline Fernandez