Zee News Exclusive: What Kangana Ranaut said about her argument with a journalist, 'movie mafia' and 'Judgementall Hai Kya'

Kangana Ranaut spoke at length to Zee News about her recent spat with a journalist, the 'movie mafia' in Bollywood and how she felt after the title of her film 'Mental Hai Kya' was changed to 'Judgementall Hai Kya'. 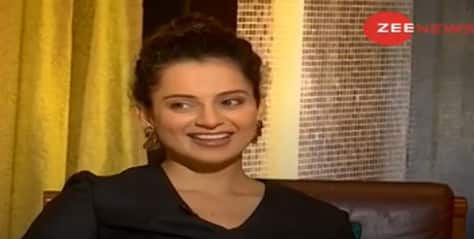 New Delhi: Actress Kangana Ranaut on Tuesday spoke at length to Zee News about her recent spat with a journalist, the 'movie mafia' in Bollywood and how she felt after the title of her film 'Mental Hai Kya' was changed to 'Judgementall Hai Kya'.

On her argument with a journalist last week at a song launch of 'Judgementall Hai Kya', Kangana said that she has never generalised media, but only condemned people misusing their position and power.

"Analysing and criticising is done by journalists, it's their work. I have always appreciated constructive criticism, because of which, I have brought changes in my life, work and acting," Kangana said, defending herself.

The incident was deeply condemned by media. The Members of the Entertainment Journalists` Guild of India (EJGI) collectively decided to boycott Kangana and demanded a public apology. After which the producer of the film, Ekta Kapoor, issued an apology.

It started when Kangana questioned the journalist over his negative remarks on her last release 'Manikarnika: The Queen Of Jhansi'. On being asked why she gets irked if 'Manikarnika', the actress said that Rani Laxmi Bai and other freedom fighters should be respected: "If Manikarnika's name is being distorted by the media, it's not justified."

Meanwhile, taking names of filmmaker Karan Johar and actor Hrithik Roshan, she said that the "movie mafia controls a section of the media."

Kangana is credited to have started the debate on nepotism in Bollywood after she accused Karan to be completely intolerant towards outsiders in the industry and said he is the flag-bearer of nepotism.

With Hrithik, she had an ugly spat over their rumoured romance - she accepted it, while he denied. This was followed by an exchange of legal complaints and mud-slinging.

On reports of her joining politics, Kangana said, "I'm a woman of my own will. I don't borrow my voice from others. If I appreciate the current government, that doesn't mean I'm joining politics, though I get many offers."

"What will I get from joining politics? I'm the highest-paid actress. If I get a stamp from any party, they will not let me voice my opinion," she added.

Kangana also raised questions on secularism in Bollywood, saying that the industry "isn't secular, but pretends to be one".

"They only want money and power," she alleged.

On selective criticism by celebs, she said these are the stars who are running the movie mafia.

She also spoke about the incident when her sister Rangoli Chandel alleged that filmmaker Mahesh Bhatt threw a chappal at Kangana at 'Woh Lamhe' premier. "This sort of a treatment is only meted out to people who are outsiders in the industry. They will not treat you how they treat their own children," she claimed.

Furthermore, for the film fraternity not supporting her film 'Manikarnika', Kangana said, "For women empowerment, if I can keep my issues aside, why can't the others?"

On being asked if she has any friends in Bollywood, she said, "There are less of selfless people in the industry, but I have a great rapport with Vijayendra Prasad (Manikarnika writer) and Prasoon Joshi. I like Tabu and Irrfan Khan, they are like-minded."

Lastly, on the controversy related to 'Judgementall Hai Kya' title, she said, "I was a bit upset after the title was changed. I wanted to normalise the word 'mental' so that there should be no shame attached to it."

Learnt so much from Naseeruddin Shah: Randeep Hooda