Bollywood's Khilji's lean body in his latest Instagram picture is winning hearts on the Internet.

New Delhi: One of the top talents of Bollywood, Ranveer Singh is currently busy shooting for his next project, '83'. The sports-drama is directed by Kabir Khan and produced by Vishnu Vardhan Induri, Sajid Nadiadwala, and Madhu Mantena.

Apart from his films, Ranveer is known for his dedication to fitness and the actor loves to flaunt his chiselled physique in his films.

On Wednesday, Ranveer decided to raise the temperature further as he took to Instagram to share a shirtless picture of himself. Along with giving him some fitness goals, the actor managed to turn heads while displaying his killer abs in the click.

As expected, the pictures received a thumbs up from several celebrities and invited thousands of comments and praises from all over. However, it was filmmaker Zoya Akhtar's hilarious comment on his photo that is breaking the internet. Ranveer captioned the picture writing, "Me looking at you eating carbs like," to which Zoya wrote, "Behave!" with a smiley emoji. 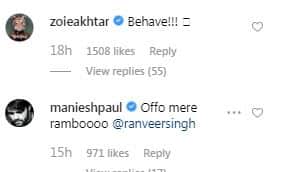 Ranveer and Zoya have worked together in 'Dil Dhadakne Do' and 'Gully Boy'.

On the work front, Ranveer will next be seen in '83'. He also has Karan Johar's period-drama 'Takht'. The plot of the film will be in the backdrop of Mughals having the story behind the war of throne. According to reports, Ranveer will essay the role of Dara Shukhoh, elder son of Saha Jahan, and also the successor of the throne.