The Gujjar agitation began on Friday over their demand for five per cent reservation in government jobs and education institutions. 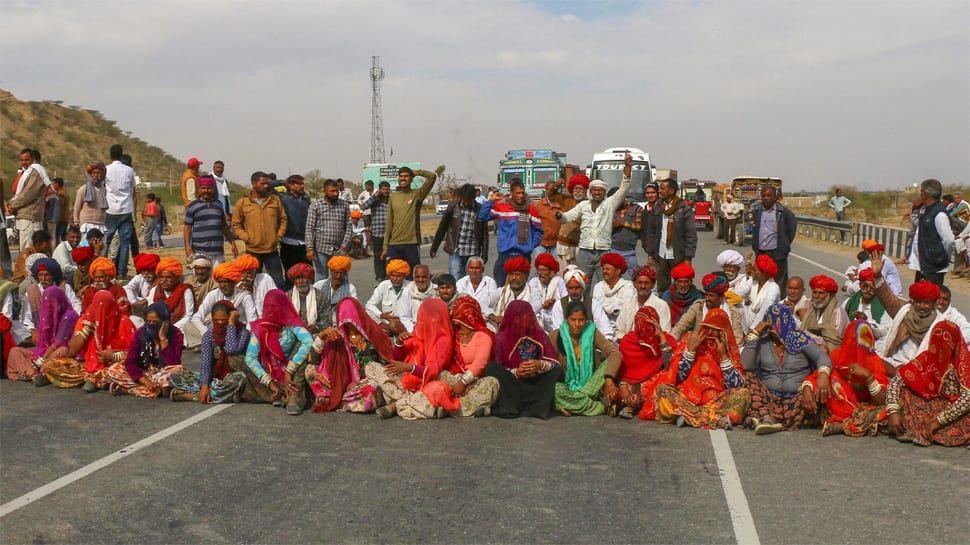 KARAULI: Rajasthan Chief Minister Ashok Gehlot on Sunday said that his government was ready to hold discussions with Gujjars after violence broke out in clashes between protestors and police earlier in the day.

Stating that sitting on railway tracks as a part of the protest was unethical, Gehlot said: "the government is ready to open discussions with the agitating community." Gehlot said the government would look into the issue and probe the violence that erupted in Dholpur.

The Gujjar Aarakshan Sangharsh Samiti (GASS) launched their agitation on Friday over their demand for five per cent reservation in government jobs and education institutions. Since Friday, the protestors have been blocking highways and traffic on the Delhi-Mumbai rail route.

Security has been beefed in view of the threat that the agitation will intensify on Monday. "We have deputed additional forces in the violence-prone areas to tackle any untoward incident," Mohan Lal Lather, Director General of Police said.

The agitation had turned violent as protesters clashed with the police personnel near Dholpur. The police had to fire tear gas shells to disperse the protesters when they began pelting stones. Three police vehicles were also set on fire. Five policemen were injured in the stone pelting. Three separate cases have been registered and investigations are on but no arrests have been made so far.

However, Gujjar Aarakshan Sangharsh Samiti chief Col. Kirori Singh Bainsla, who is spearheading the protest, blamed anti-social elements who have become a part of the protest for the violence.

Rajasthan Tourism Minister Vishwendra Singh and IAS officer Neeraj K. Pawan had visited the GASS chief on Saturday near Malarna Dungar in the Sawai Madhopur district to hold negotiations but the talks had failed to make any headway.

Meanwhile, the Rajasthan government pasted a notice at Bainsla's residence warning him against violation of court directives on agitation. In the notice pasted by the Karauli district administration at Bainsla's Hindaun residence, it has been stated that Supreme Court and different high courts have on several occasions directed that no public or private property be damaged and rail or railway traffic be disrupted during any agitation.

"If the Supreme Court and high court directives are not followed, you will be held responsible for contempt of court," the notice said.