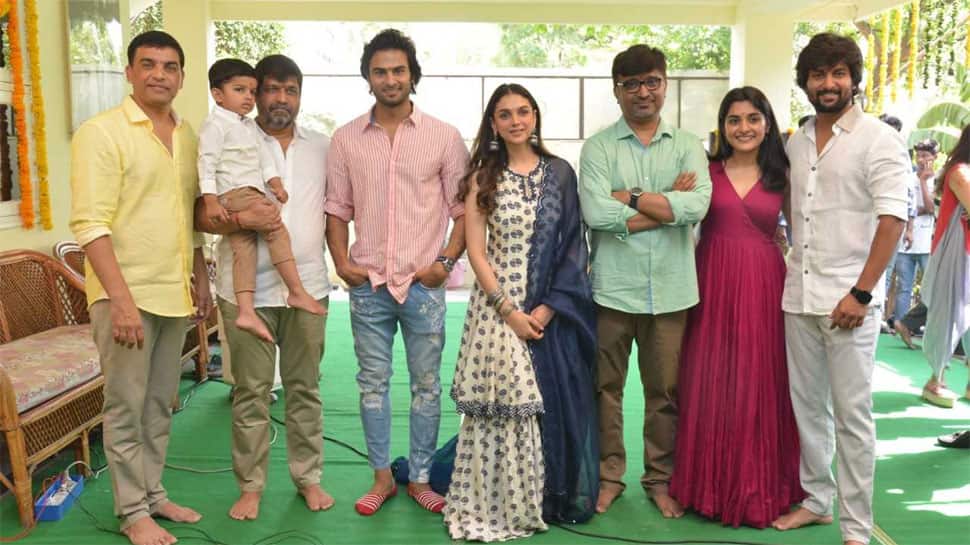 Finally, Indraganti Mohanakrishna’s upcoming film has been launched, and as expected the film has Nani, Aditi Rao Hydari, Sudheer Babu and Nivetha Thomas in the lead roles. The film has been launched officially on Monday with a puja and the script has been handed over to the actors. Photographs from the launch have been released by Sri Venkateswara Creations, the production house which is run by Dil Raju.

The popular producer is producing the film, which is expected to go on floors in a month or so. At the launch, the first clap was given by director Sriram Venu of MCA fame and camera was switched on by Trinadha Rao Nakkina of Nenu Local fame. The first scene was directed by director Anil Ravipudi of F2 fame.

Well, let us reveal the title to you. This film is titled V and it marks the 25th film of Nani in Telugu film industry. This is definitely a big thing for the actor and his fans. Coincidentally, it was Indraganti who introduced Nani to the big screen with Ashta Chamma and it was a blockbuster hit. Later, they have done a couple of films together and once again, they have teamed up for V. Nani’s 25th film being directed by Indraganti feels very nice for the audience, as well as the actor too.

All the actors who have been roped in to play the lead roles have worked with Indraganti earlier and they are spellbound with his direction skills. While Nani and Nivetha have worked with him for Gentleman, Aditi Rao and Sudheer have paired up for Sammohanam. This film is going to be a neo-noir thriller and is expected to release later this year.