In a late-night crane accident on February 19 at the EVP Film City on the outskirts of Chennai, three technicians - assistant director Krishna, art assistant Chandran and production assistant Madhu - had died and ten others were injured. 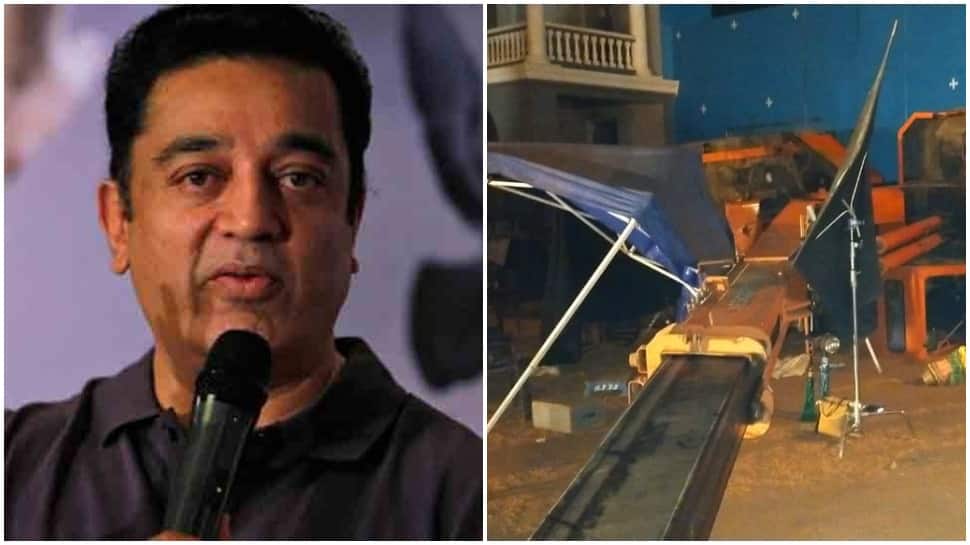 New Delhi: Actor-turned politician Kamal Haasan appeared before the Chennai Police at the Commissioner's Office after summons were issued for a probe into the crane crash at  'Indian 2' film set that illed three technicians and injured ten others in February. He said that it was his duty towards his deceased brothers for him to appear before the police and share the details of what occurred on the day of the accident. Last week, Director Shankar was summoned for a similar probe into the accident. In order to understand the safety measures that were in place at the shooing site, the police have been summoning the people who were present at the accident spot.

Speaking to reporters he said, "The Commissioner’s Office wanted to seek details about the incident that took place that day. I was one among those who survived that accident. I have explained to the police to the extent that I have known. This is the first step to prevent such accidents from occurring in the future."

"If there are other suggestions and recommendations from the police on how to improve security and safety at the shooting location, we are willing to implement that as well. Yesterday, there were many people from the film industry who came and met me, we are trying to ensure that no such incident occurs again. Soon our fraternity will meet to discuss the measures to be taken and we will share the outcome," he added.

In a late-night crane accident on February 19 at the EVP Film City on the outskirts of Chennai, three technicians - assistant director Krishna, art assistant Chandran and production assistant Madhu - had died and ten others were injured.

A day after the accident, Hassan had expressed disappointment and embarrassment at how the film industry could boast of 100 crore and 200 crore collections, but failed to provide basic security for the personnel on set. He also recalled that he and actress Kajal Aggarwal were among those who had a narrow escape on that fateful night.

Hassan had earlier announced a temporary financial assistance of Rs 1 crore for the bereaved families, while the producer Subaskaran had offered Rs 2 crore monetary aid.

A week after the accident Director Shankar had tweeted, "It is with utmost grief, I'm tweeting. Since the tragic incident, I’ve been in a state of shock & having sleepless nights on the loss of my AD & crew. Having missed the crane by a whisker, I feel it would've been better if it was on me. Heartfelt condolences & prayers to the families."