'Most cherished moment': How Pawan Kalyan described his meeting with Amitabh Bachchan

The pictures are from the sets of Chiranjeevi's much-anticipated magnum opus 'Sye Raa Narasimha Reddy', in which Amitabh Bachchan has a cameo. 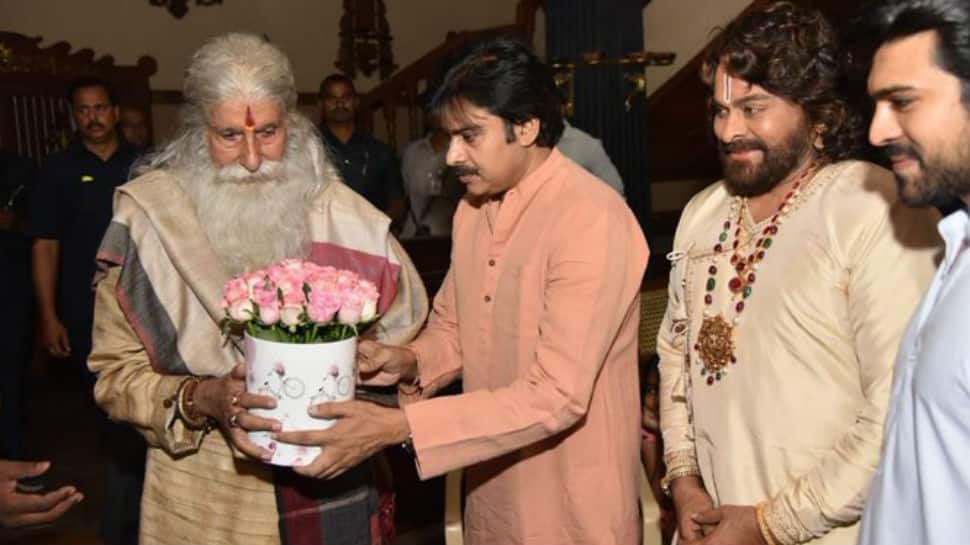 New Delhi: Actor Pawan Kalyan on Thursday shared pictures from the 'most-cherished' moment of his life - meeting Amitabh Bachchan - and described what the megastar's life teaches everyone.

"Most cherished moment of my life meeting my idol, respected Shri Amitabh Bachchan, on the sets of 'Sye Raa'. His life teaches us how one should rise against all odds that life keeps throwing and be victorious," is how Pawan Kalyan described the meeting.

Most cherished moment of my Life;meeting my Idol, Respected ‘Shri Amitabh Bachchan ji’, on the sets of ‘Saira.’ His life teaches us ,how one should rise against all odds that life keeps throwing and be victorious. pic.twitter.com/YrDQVXcrKe

'Sye Raa Narasimha Reddy' is based on the life of freedom fighter Uyyalawada Narasimha Reddy. It is directed by Surender Reddy. Big B plays the role of Chiranjeevi's guru Gosaayi Venkanna in the film. It is set 10 years prior to India's first war of independence, which took place in 1857.

At the teaser launch of the film, Chiranjeevi said he is impressed and overwhelmed by the generosity of Big B to work with him in 'Sye Raa Narasimha Reddy'.

"There is only one megastar and that is Amitabh Bachchan. Working with him is a great experience. In the film, he is playing the character of my guru. My director wanted him to play the part. I made a call to him because I wanted to try once. He said, 'you tell me, what do you want?'. I told him that I was making a film on the unsung hero Sye Raa Narasimha Reddy, and there is a special character of a guru, a teacher. I told him I wanted him to play my 'guru'," news agency IANS quoted him as saying.

'Sye Raa Narasimha Reddy' is scheduled to release on October 2.