NT Rama Rao's greatness should and could have emerged organically from the plot. 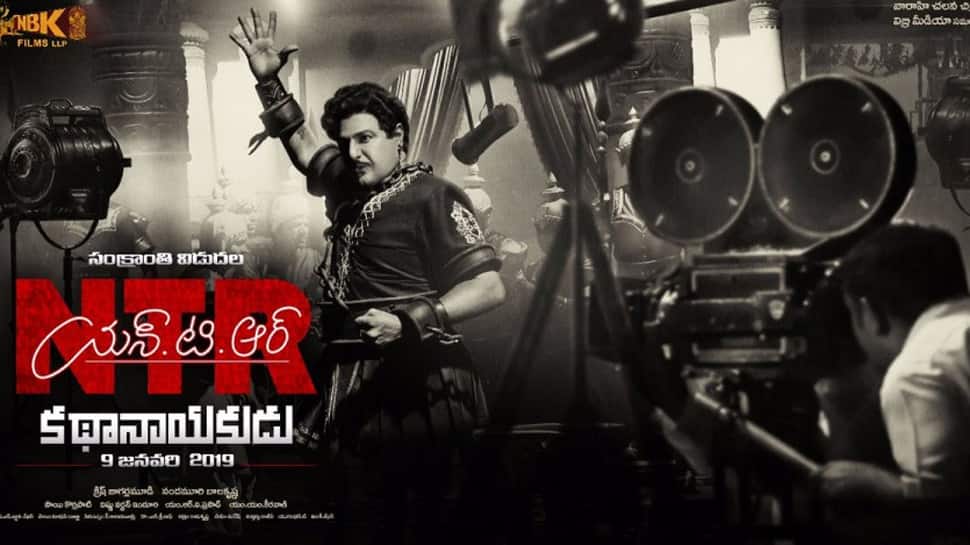 If anyone can do justice to the sprawling splendour of Telugu actor-politician N T Rama Rao's amazing lifescape, it is his son Balakrishna. To be sure, Balakrishna sinks his teeth into his father's role, opting to touch the core of humanism in the artiste rather than skimming the surface of his iconic image.

There is a wonderfully staged sequence in this eagerly-awaited, but alas, ultimately disappointing biopic where NTR, all decked up as Lord Krishna, strides across the studio premise in all his Godly glory for the first time. The sheer impact of his supernatural walk from earthly star to demi-divinity, accompanied by M.M. Kreem's nostalgia-dipped music, is magical.

There aren't too many such magical moments to hold on to in this three-hour marathon on the mythic maestro who changed the course of Telugu cinema and politics. This film, sadly, won't change anything. It is doubtful without the overpowering panegyric that the film will introduce the Legend to a new generation of moviegoers. But the cascade of gush cannot connect with the young. The youth today favour flaws. This film shuns it like a disease.

NT Rama Rao's greatness should and could have emerged organically from the plot. When his screen avatar is shown shooting through a comic sequence after the death of a close family member, we feel his greatness without having it spoonfed to us. And Lord Krishna knows, Balakrishna exudes that sense of greatness whenever the script allows him to look into his father's life objectively.

But that rarely happens as in scene after scene, characters are shown pointing to the Great Man and then heavenwards to let us know that we are indeed in the presence of unhampered greatness.

Where "Mahaniti", the Savithri biopic scored, was in bringing out the human side of the legend, flaws and all. "NTR Kathanayakudu" wants us to believe NTR was flawless. That may or may not be true. It depends on which side of the papier-mache halo you are standing on. The film can lay no claim to being without flaws. It heaves and groans with adulation and eventually gets entertaining for the vast cast of unlikely actors playing well-known filmmakers.

Why on earth is the Bengali actor Jisshu Sengupta cast as the celebrated producer L.V. Prasad? Even more ludicrous is director Krish as filmmaker K.V. Reddy. Every time he talks about NTR, he gets a glazed faraway look in his eyes.

NTR's well-known gallery of gorgeous heroines gets to be a part of this exercise in image-boosting. While Nithya Menen is convincing as Savithri, the other actresses, including Rakul Preet Singh as Sridevi and Hansika Motwane as Jaya Prada, are woefully inadequate.

But the funniest encounter of the God kind is with Mrs Indira Gandhi. When NTR receives his Padma Shri, Indira Gandhi, played by Supriya Vinod (who also played a similar role in Madhur Bhandarkar's "Indu Sarkar") calls the actor ‘Madrasi'. NTR flares up about Telugu identity, blah blah.

Balakrishna strides across the imminently ruinous mediocrity creating a figure not as formidable as his father, but still convincing. Vidya Balan as his wife looks radiant and her body language of a traditional Telugu housewife is bang on. At a death, she wails with professional ferocity. But she doesn't have much to do except look worried when her unpredictable husband makes suicidal career moves and look happy when he triumphs.

I guess we are supposed to react the same way. And the truth can rest in peace.