Ranbir and Alia will reportedly tie the knot on May 11, 2019

New Delhi: Bollywood actor Ranbir Kapoor and his lady love Alia Bhatt are all set to take things to the next level. India's most desirable man and one of the best actors in the film industry, Ranbir is now on his way to becoming the best husband to the love of his life Alia and things are happening sooner than we expected!

Ranbir and Alia will reportedly tie the knot on May 11, 2019, in a five-star hotel in Mumbai. The news comes as a shocker because just a few days ago, Alia's Soni Razdan mother denied any such rumors. The actress too didn't seem to toy with the idea of marriage anytime soon.

The couple is reportedly in talks with some imminent wedding planners to sort out everything for them. Meanwhile, we got our hands on their wedding card which was leaked by one of the insiders

Check out the card: 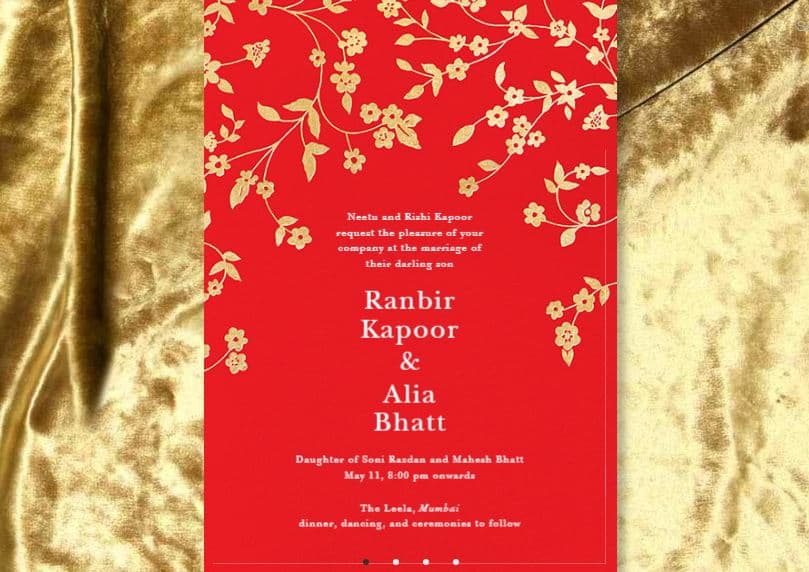 As per sources, the couple will host a lavish reception for their industry friends in Mumbai and will head to Mykonos in Greece for their honeymoon. Veteran actor Rishi Kapoor, who is undergoing treatment in New York, is expected to arrive in April for the wedding. Ranbir's sister Ridhima Kapoor Sahni, who is a renowned jewelry designer in Delhi, has designed their wedding rings.

Well, before you cry your eyes out and flood Alia Bhatt's Instagram handle with messages and remove all Ranbir Kapoor posters from your room, don't forget to check today's date.

Yes!  it is April Fool's day today. And we are happy to make a fool out of you on this day because no better day than Fool's day. Although the news is not true, we sincerely hope to see them as a married couple someday

(Disclaimer: This is just a piece of fiction created solely for fun and the wedding card is as fictitious as the story is. We don't intend to offend anyone through our post)