Physicists avoid theories and experiments that make use of Mathematics, says research!

The study shows that physicists pay less attention to theories that are crammed with mathematical details. 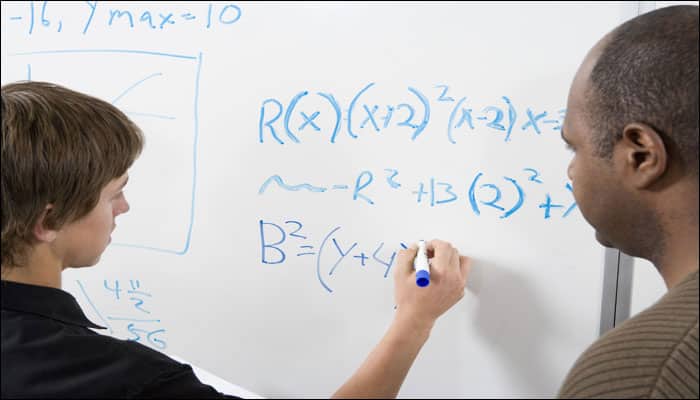 Washington DC: The subject of Mathematics has earned the scorn of those who don't understand it and the same people have immense respect for those few who do.

Most of us, we're sure, are all too familiar with the panic attacks and anxiety whenever we encountered a tough Math problem in school and the struggle to remember Algebra, equations and probabilities is something that will haunt us our entire lives.

Little did we know, physicists too – yes, physicists – have a problem deciphering the nuances of the subject and avoid highly mathematical work, despite being trained in advanced mathematics, a recent research has suggested.

The study shows that physicists pay less attention to theories that are crammed with mathematical details. This suggests there are real and widespread barriers to communicating mathematical work, and that this is not because of poor training in mathematical skills, or because there is a social stigma about doing well in mathematics.

Dr Tim Fawcett and Dr Andrew Higginson, from the University of Exeter, found, using statistical analysis of the number of citations to 2000 articles in a leading physics journal, that articles are less likely to be referenced by other physicists if they have lots of mathematical equations on each page.

Dr Higginson said: "We have already showed that biologists are put off by equations but we were surprised by these findings, as physicists are generally skilled in mathematics.

"This is an important issue because it shows there could be a disconnection between mathematical theory and experimental work. This presents a potentially enormous barrier to all kinds of scientific progress."

The research findings suggest improving the training of science graduates won't help, because physics students already receive extensive maths training before they graduate. Instead, the researchers think the solution lies in clearer communication of highly technical work, such as taking the time to describe what the equations mean.

Dr Fawcett said: "Physicists need to think more carefully about how they present the mathematical details of their work, to explain the theory in a way that their colleagues can quickly understand. It takes time to scrutinise the details of a technical article-even for the most distinguished physics professors-so with many competing demands on their time scientists may be choosing to skip over articles that take too much effort to digest."

"Ideally, the impact of scientific work should be determined by its scientific value, rather than by the presentational style," said Dr Higginson.

"Unfortunately, it seems valuable papers may be ignored if they are not made accessible. As we have said before: all scientists who care about the dialogue between theory and experiment should take this issue seriously, rather than claiming it does not exist."

The study has been published in the New Journal of Physics.