The tourism industry in Shimla has also been massively hit as tourists are cancelling their visits to the popular hill-station. 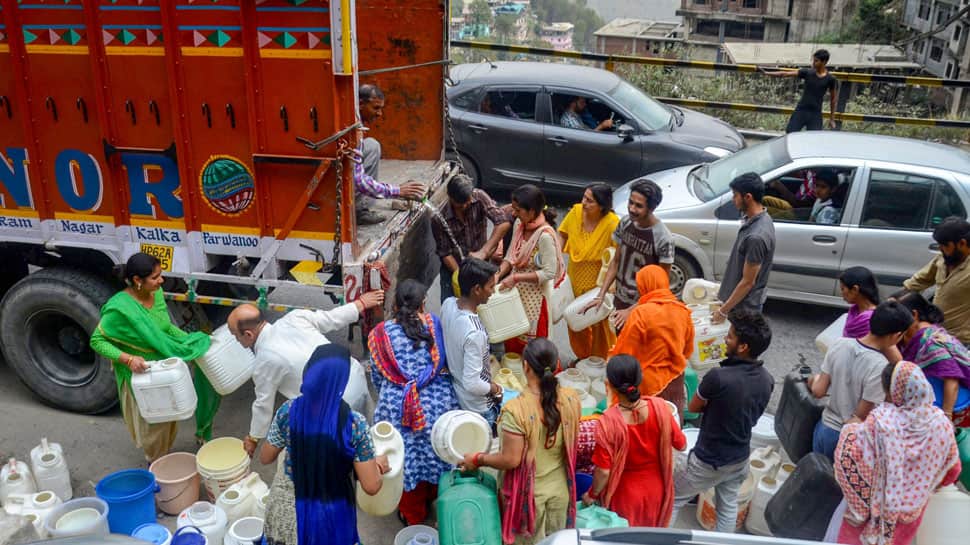 People gather around a truck to collect water, as the city faces acute shortage of drinking water, in Shimla on Wednesday, May 30, 2018. (PTI Photo)

SHIMLA: As Shimla grapples with acute water shortage for the eleventh day in a row, the local authorities seized illegal water connections spread across the city.

“I received a couple of complaints regarding the illegal connections of water and they were correct. So, I have ordered the seizure of same and have told the concerned people to take appropriate action against the culprits,” Amit Kashyap, Deputy Commissioner, Shimla told ANI.

“I myself visited some spots in order to take a stock of the situation. Investigation in the case has been ordered and culprits will not be spared,” he added.

The Himachal Pradesh High Court on Wednesday came out with stringent orders, asking to halt construction activities, banning car wash for a week in core areas, and cutting tanker water supply to individuals in VIP areas of the parched state capital. The court also cut off water connections to more than 220 hotels and guest houses that haven't deposited their water bills.

The tourism industry in Shimla has also been massively hit as tourists are cancelling their visits to the popular hill-station. During the peak tourist season, about 20,000 visitors arrive in Shimla every day.

The Shimla administration has also postponed a major tourist attraction, International Shimla Summer Festival, scheduled from June 1 to 5 due to the scarcity of water in the town.

Amid the acute water shortage and possible public backlash, the state government divided Shimla City into three zones for to distribute sufficient water. Thakur directed officials that equitable water distribution should be ensured to all the localities after every three days.

It was informed in the meeting that water would be supplied in two shifts in Kasumpati, Panthaghati, Chhota Shimla, Vikasnagar, Patyog, Kangna Dhar, New Shimla, Khalini and other peripheral areas of these regions.

In Chhota Shimla, Vikasnagar and Khalini water would be supplied in evening and in Kasumpti, Panthaghati, Patyog, Kangna Dhar, New Shimla and other peripheral areas of these regions water would be given in the morning.

Similarly, a schedule for providing water to other zones has been fixed.