The researchers were able to show that 14 of the 16 satellite galaxies follow the same pattern of movement and are likely rotating within the plane around the main galaxy. 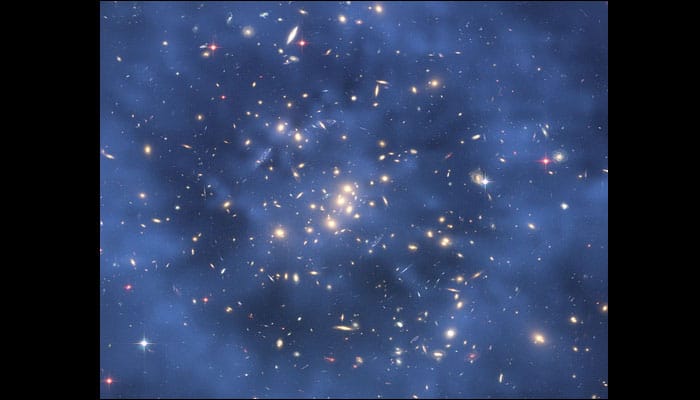 London: Dark matter was one of the biggest secrets of the vast universe that was divulged in the 1970s.

It is a mysterious and as-yet-unobserved component. Its nature remains unknown, but scientists estimate that it is five times as abundant as ordinary matter throughout the universe.

Deepening the mystery around it, new research has found that the small satellite dwarf galaxies orbiting around the much larger galaxy Centaurus A are rotating in synchrony around their host.

These observations do not fit with the standard model of cosmology that assumes the existence of dark matter, said the study published in the journal Science.

Simulations based on standard cosmology predict that fewer than one percent of satellite systems should exhibit this synchronous behaviour.

Because our own Milky Way and the neighbouring Andromeda Galaxy also have similar arrangements of coherently orbiting satellite galaxies, new findings suggest that standard cosmological simulations may be wrong.

Current theories of galaxy formation, based on standard cosmological ingredients such as dark matter, predict that small dwarf satellite galaxies should orbit in random positions and directions around their closest large galaxy.

For the study, researchers led by Oliver Muller from the University of Basel in Switzerland analysed the movement of satellite dwarf galaxies around Centaurus A, a galaxy around 13 million light-years away.

The researchers were able to show that 14 of the 16 satellite galaxies follow the same pattern of movement and are likely rotating within the plane around the main galaxy.

According to model simulations with dark matter, however, only half a percent of satellite systems in the local universe at most should behave this way.

The astronomical observations challenge the simulations. The researchers said that the possibility of coincidence can be ruled out, as this result -- already seen in the Milky Way and the Andromeda galaxy -- has now been detected a third time, in Centaurus A.