As per reports, on Friday, May 19, a sudden dip in brightness of the Tabby Star observed in the skies, resulted in many astronomers pointing their telescopes at the star to decode its curious signals. 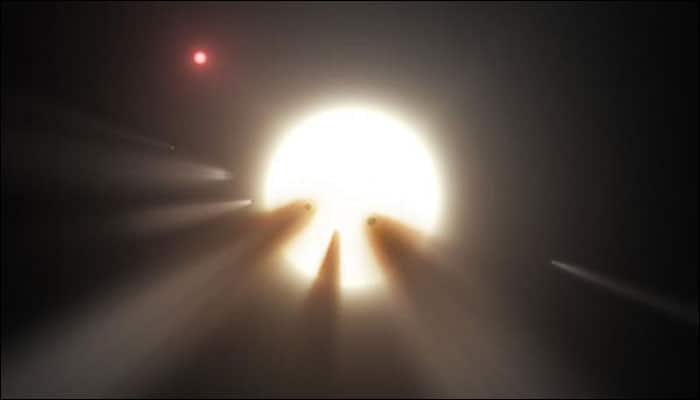 New Delhi: The Milky Way's most mysterious 'alien megastructure' star, also known as Tabby Star – named after Tabetha Boyajian, lead researcher of the team that observed the celestial body in 2015 – has been an object of intrigue due to its strange nature.

Discovered by the NASA's Kepler Space Telescope, the KIC 8462852 has had scientists propose many theories to explain strange irregularities in its brightness, with one speculation being that the changes in brightness could be signs of activity associated with intelligent extraterrestrial life constructing a Dyson swarm.

The SETI Institute's initial radio reconnaissance of the star, however, found no evidence of technology-related radio signals from the star.

The Boyajian Star, as it is also known, is in the news once again since astronomers have observed that its started dimming once more.

As per reports, on Friday, May 19, a sudden dip in brightness of the Tabby Star observed in the skies, resulted in many astronomers pointing their telescopes at the star to decode its curious signals.

Located some 1,300 light years away in the constellation Cygnus, the star dimmed by up to 22 percent before returning to normal at the time it was discovered showing the mysterious changes in 2015.

According to the Deccan Chronicle, in the following year, a review of old photographic plates revealed that the star dimmed by 14 percent between the year 1890-1989, and has faded by another 3 percent over four years, as detected by the Kepler Space Telescope.

Jason Wright, Associate Professor of Astronomy and Astrophysics at Penn State, broke the news on Twitter, urging amateur and professional astronomers to point their telescopes towards Tabby’s star and to provide spectra results for further analysis.

This is not a drill.

Astro tweeps on telescopes in the next 48 hours: spectra please!

Soon, Tabetha Boyajian herself tweeted about the dimming:

During a live webcast later, Jason Wright said, “At about 4 a.m. this morning I got a phone call … that Fairborn [Observatory] in Arizona had confirmed that the star was three percent dimmer than it normally is. That is enough that we are absolutely confident that this is no statistical fluke. We’ve now got it confirmed at multiple observatories, I think.”

“Whatever’s causing the star to get dimmer will leave a spectral fingerprint behind,” Wright said during the webcast. “So if there is a lot of dust between us and the star … it will block more blue light than red light. If there is gas in that dust, that gas should absorb very specific wavelengths and we should be able to see that. And so, we’ve been eager to see one of these changes in one of these dips of the star so we can take some spectra.”

It’s difficult to predict when and how long a dimming event would occur, which is why astronomers make it a point to schedule professional-grade telescope observations weeks or months in advance. “We need to have a network of people around the world that are ready to jump on [and observe it],” Wright said.

“Fortunately, Tabby’s star is not too faint and so there are a lot of observers and telescopes … that have graciously agreed to take some time out of their science to grab a spectrum for us [tonight],” as reported by the Inquistr.

The behaviour of the star is indeed baffling and there is no established explanation to the irregularities it so often displays, yet.

Below is the archived live stream with Jason Wright: