Sunscreen snowfall on a giant planet outside solar system

The problem is the sunscreen (titanium oxide) precipitation only happens on the planet's permanent nighttime side. 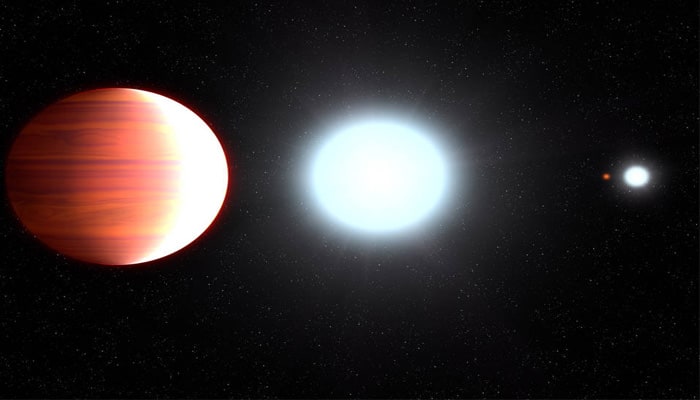 New Delhi: With the help of Hubble Space Telescope, NASA scientists have discovered a hot planet outside our solar system where the atmosphere snows sunscreen.

The problem is the sunscreen (titanium oxide) precipitation only happens on the planet's permanent nighttime side.

Any possible visitors to the exoplanet, called Kepler-13Ab, would need to bottle up some of that sunscreen, because they won't find it on the sizzling hot, daytime side, which always faces its host star.

Hubble astronomers suggest that powerful winds carry the titanium oxide gas around to the colder nighttime side, where it condenses into crystalline flakes, forms clouds, and precipitates as snow.

Kepler-13Ab's strong surface gravity, six times greater than Jupiter's, pulls the titanium oxide snow out of the upper atmosphere and traps it in the lower atmosphere.

Astronomers using Hubble didn't look for titanium oxide specifically. Instead, they observed that the giant planet's atmosphere is cooler at higher altitudes, which is contrary to what was expected.

This finding led the researchers to conclude that a light-absorbing gaseous form of titanium oxide, commonly found in this class of star-hugging, gas giant planet known as a "hot Jupiter," has been removed from the dayside's atmosphere.

The Hubble observations represent the first time astronomers have detected this precipitation process, called a "cold trap," on an exoplanet.

Without the titanium oxide gas to absorb incoming starlight on the daytime side, the atmospheric temperature grows colder with increasing altitude.

Normally, titanium oxide in the atmospheres of hot Jupiters absorbs light and reradiates it as heat, making the atmosphere grow warmer at higher altitudes.