According to a legend, Lord Rama sent Hanuman to Varanasi (Kashi) to bring a Linga so that he could worship Lord Shiva before leaving for Lanka. 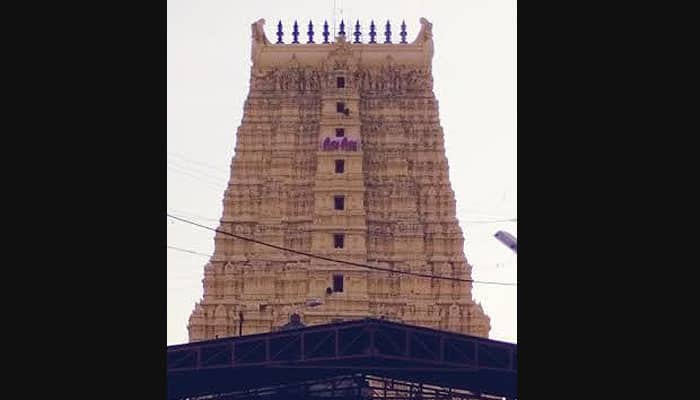 The Eastern end tower of the Ramanathaswamy Temple in Rameshwaram, Tamil Nadu.
Share:
Written By:

Rameshwaram, an island off the coast of the state of Tamil Nadu in mainland India, is home to one of the twelve Jyotirlingas. Named Ramalingam, the Linga was worshipped by Shri Rama before he left for Lanka to wage a war against Ravana to free Mata Sita, who had been held captive by the demon king.

According to a legend, Lord Rama sent Hanuman to Varanasi (Kashi) to bring a Linga so that he could worship Lord Shiva before leaving for Lanka. However, soon after sending Hanuman to Kashi, Rama, anticipating that his prayer would get delayed, made a small linga of sand from the sea shore and worshipped it.

When Hanuman returned with a Linga from Kashi, he was upset to see Shri Rama already offering prayers. In a fit of rage, childlike Hanuman tried to destroy the Linga made of sand with his tail.

But his might couldn’t work against Lord Shiva, who had been invoked by Shri Rama in the Linga. The sand structure soon hardened and turned into stone and Hanuman fell a few feet away owing to the sheer force.

In order to pacify his dearest devotee’s anger, Lord Rama applied Kumkuma (sindoor) and ghee all over his body. On seeing Lord Rama’s compassion, Hanuman cooled down.

And to ensure Hanuman’s efforts don’t go in vain, Rama also worshipped the Linga brought by him from Kashi.

Hence in the Ramanathaswamy Temple in Rameshwaram, the Linga (Vishwalingam) brought by Hanuman is worshipped before the RamaLingam even today.

Devotees, who visit this temple, can also take Darshan of the Spatika Lingam in the morning between 5 – 6 AM every day. The Spatika Lingam (Linga made of crystal) illuminates light and looks like a Linga of fire. The special darshanam can be taken by buying a ticket worth Rs 50.

Rameshwaram is one of the holiest places of pilgrimage for the Hindus and visited by thousands every day. The divine island is connected to mainland India by rail and roadways.

Sthanumalayan: An amalgamation of Brahma, Vishnu and Shiva – A rare occurrence!