After restricting England to a below par total of 142 runs, Afghanistan batsmen failed against Eoin Morgan & Co. 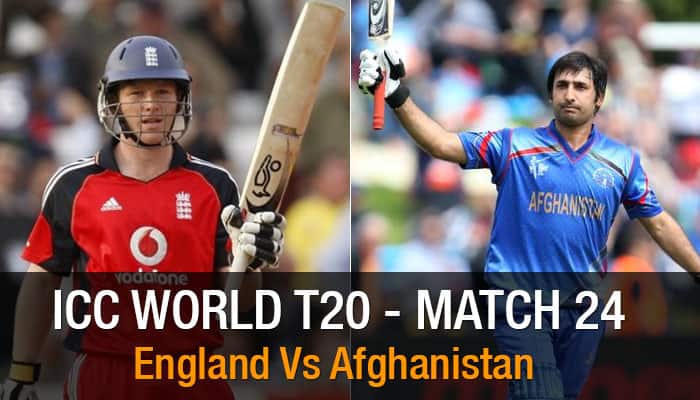 England beat Afghanistan by 15 runs. Afghanistan once again fight valiantly but, England emerged winners thanks to a brilliant performance from Moeen Ali. Thus, the Associate team crashed out of the tournament, having lost three games. 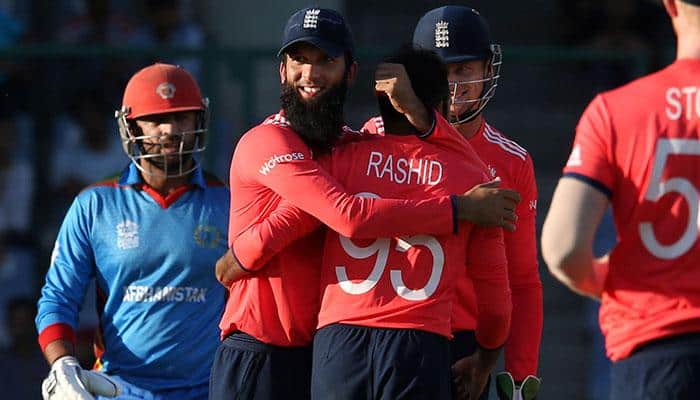 Of all the promises, Afghanistan started with a four to make the chase a realistic one. Then, after a brief stoppage , thanks to a fallen kite interrupting the play, Ben Stokes produced a snorter of short ball.

Shafiqullah even asked his running partner Shapoor Zadran from taking a single. And he tried all the shots in the book, everything. For his efforts, the last ball went for a four through the covers.  Eight runs from the over.

Thus Afghanistan are knock-out of the tournament, after losing three back-to-back matches.

A run out to start the penultimate over. Chris Jordan took some time to effect the run out, but it was completed without much ado.

Jordan, however, failed to contained Shafiqullah. The right-handed lower-order batsman hit a four and six of consecutive balls. 11 runs from the over. Jordan's figures: 4-0-27-1.

Shapoor Zadran is the new man.

This may not be enough to take Afghanistan home, but Shafiqullah is giving his all. Took six runs of David Willey's last over, which included a four.

Afghanistan need another 35 runs from 12 balls.

That looked an tired effort. Samiullah Shenwari played 27 deliveries and he still conjure up a half-cook shot, which landed just round about the circle boundary.

Ben Stokes thus got his first wicket, of the fourth ball of second over.

However, the over went for 14 runs as Shafiqullah creamed a six of the last ball, over mid-wicket. Afghanistan need another 41 runs from 18 balls.

Amir Hamza is the new man.

Unfortunate for Najibullah Zadran. His dive was good by the bat was in the air. And a direct hit from bowler Chris Jordan meant that Afghanistan have lost seven wickets.

That happened in the fourth ball of the over.

In between, England bowlers are racing through the overs. Chris Jordan completed his third over.

Shafiqullah is the new man and Afghanistan need another 55 runs from 24 balls.

A busy over. Five singles, a wide, a direct throw. Ben Stokes operated with discipline, and conceded six runs. In the penultimate delivery, Najibullah Zadran saved himself with his stretched bat against a direct hit.

It seems, some fight is still left. Newly arrived Najibullah Zadran just milked Moeen Ali for 11 runs, thanks to a four and six. The over leaked 13 runs.

Afghanistan need another 66 runs from 36 deliveries.

Then, that burgeoning partnership was broken with Mohammad Nabi playing a rather adventurous shot without enough power.

He tried to loft the fifth delivery of Adil Rashid's third over over mid-on boundary. But he ended up offering an easy catch to Chris Jordan.

Four runs and a wicket from the over. Najibullah Zadran is the new batsman.

A steady partnership between Mohammad Nabi and Samiullah Shenwari. They have punt up 21 runs in 3.1 overs.

One first big over for Afghanistan. Mohammad Nabi hit a six of the last ball of Adil Rashid's second over, straight. It's another thing that Nabi was dropped in the previous delivery. Grassed by Jos Buttler, behind the wicket.

Nine from the over, and Afghanistan need 89 runs from 54 balls.

Half way through the innings, and Afghanistan have brought down the target under 100-run mark. At the same time, they have lost five wickets too.

Five runs from the over, three singles and a two. Liam Plunkett is wicket-less but has conceded only six runs from his three overs.

Afghanistan need another 98 runs from 60 balls.

Pity! After such a splendid work with the ball, Afghanistan batsmen have spoiled their own party with careless play.

Noor Ali Zadran, who was looking at his elements, offered simplest of return catches to Adil Rashid.

Five runs and a wicket. Adil started his spell on a rollicking way.

Excellent first over from Moeen Ali. A seemingly frustrated Rashid Khan cam down the pitch and tried lofting a flighted delivery, only to witness Eoin Morgan taking a leaping catch at cover.

Mohammad Nabi is the new man and Afghanistan need 108 runs  from 12 overs.

Afghanistan will need much more than the singles if they are to have their first scalp in international cricket. Bowlers have set up the job, now, it's batsmen's to complete it.

Then, Rashid Khan followed up that brave shot with the first six of the innings, in the fourth ball of the over.  A cut behind square, which went flat.

Chris Jordan conceded eight runs from the over. Afghanistan need another 115 runs from 14 overs.

Afghanistan got second four of the innings thanks to Rashid Khan. The young all-rounder played a smart shot, uppercut over the wicket-keeper's head.

That was in the last ball of the fifth over. Seven runs from the over.

Liam Plunkett, what a first over, from the right-arm fast bowler. A maiden. A rare sight in T20, even against the so called minnows.

What a turn around. It was spinners for Afghanistan, now swing for England. David Willey got his second of the match, by removing Gulbadin Naib in the last ball of his second over. Ben Stokes took a comfortable looking catch at extra cover.

One run and a wicket from the over. Afghans in big, big trouble. Rashid Khan is the new man.

Chris Jordan shared the new ball with David Willey. A miss-field allowed Afghanistan to steal two runs of the first ball of the over.

Afghanistan need another 131 runs from 18 overs. Gulbadin Naib is the new man for Afghanistan.

Edged for a four. That's bad omen for England. Mohammad Shahzad lucky to have survived the teasing ball.

Thus arrived skipper Asghar Stanikzai. Nine runs from the over

After Afghan spinners majestic spell, Moeen Ali and David Willey played with purpose to build a 57-run stand in 5.3 overs. That probably just did the job for the favourites. But again, Afghans batted really well against South Africa - a side with very very good bowling attack.

England ended their innings on a positive note with Moeen Ali producing a late onslaught. He remained unbeaten on

The last over yielded 10 runs.

And Moeen Ali and David Willey just made their bowling jobs lot easier with a 25-run over. Amir Hamza was taken to the cleaners in his final over, three sixes and a four and a leg bye.

With that Ali-Willey partnership alse came close to 50-run mark.

England, thanks to Moeen Ali, seemed that have garnered enough runs to defend. Ali took nine runs of Shapoor Zadran's third over and England have crossed morale boosting 100-run partnership.

Another tight over from Afghanistan. Rashid Khan conceded four singles, and thus completed his quota of four overs. His figures: 4-0-17-2.

A good over nonetheless for England. Seven runs from Mohammad Nabi's final over.

David Willey took a single of the first ball, then Moeen Ali hit his first four, through the slip cordon. Two singles followed.

Chris Jordan's brief stay ended with Rashid Khan getting better of him. Caught and bowl. Brilliant bowling from the 17-year-old spinner from Nangarhar.

Six runs and a wicket from the over. Khan has completed three overs, taking two wickets, conceding 13 runs.

David Willey is the new man.

Chris Jordan started with a single of the second ball. Another single followed. Then Jordan timed to perfection as the ball raced the won against Hamza. A single to complete the over.

After a long time, a reasonably good over for England, thanks to a 5 wides. Samiullah Shenwari, in his last over, conceded nine runs, including those extras.

In the last five overs, England have managed 23 runs losing a wicket. Good period, so to say, in the context of the game.

A web spin has enveloped Afghanistan in such a way that there seems to be no escape for the Poms. A single from Rashid Khan's second over.

Another good over for Afghanistan. Samiullah Shenwari conceded five singles. Shenwari has completed three overs, leaking 14 runs only and also taking a wicket.

Rashid Khan struck in his first over. Ben Stokes started with a pull shot for a four. But Khan got Stokes wicket the very next ball, played on. 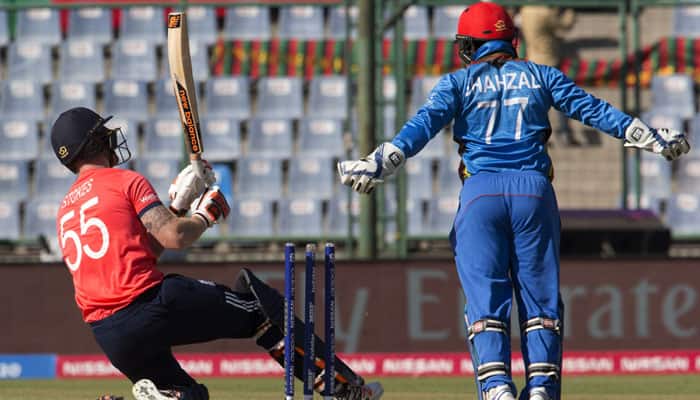 Six runs and a wicket. Chris Jordan joined Moeen Ali in the centre.

Mohammad Nabi everywhere. He took a full body length dive at short extra cover to send back Jos Buttler back, of the bowling of Samiullah Shenwari.

A wicket and three runs from the over. Moeen Ali, the new man.

Mohammad Nabi completed raced through his second over, conceding only two runs. A single each to Ben Stokes and Jos Buttler.

That magnificent over was followed by a good over from Samiullah Shenwari. The leg-break bowler conceded six runs and England continue build up from that three-wicket shock.

What an over from Mohammad Nabi. The spinner removed James Vince and Eoin Morgan off successive deliveries, then a contentious LBW decision denied him the hat-trick. But a ball later, set batsman Joe Root ran himself out. Good work done by the bowler himself to uproot the wicket after the initial throw disturb it. 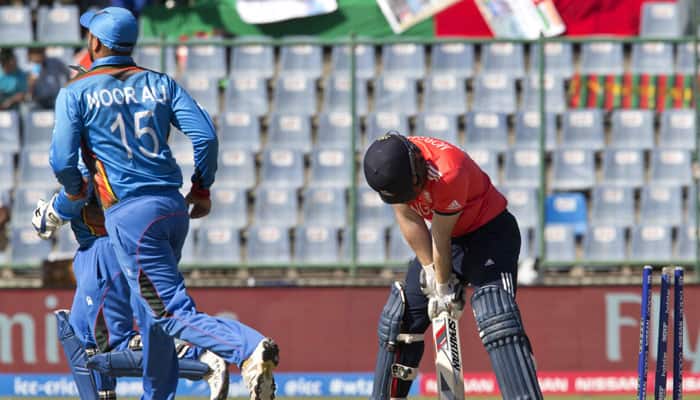 One runs and three wickets in the over. Ben Stokes and Jos Buttler are the new men in the centre.

The trend followed, with James Vince starting the fifth over with a brilliant cover drive for a four. A single followed. Then, Joe Root hit a four with a reverse sweep.

A dot followed, then a single, then Vince hit his second four of the over, through the cover area.

Business as usual for James Vince though. He started the next over with a four, straight drive. A single followed, then newly arrived Joe Root struggled to open his account, for three balls.

Then, the right-handed batsman played a pre-meditated hook shot for the first six of the match.

James Vince started the third over bowled by Amir Hamza, with a cover drive four. Then the Afghan wicket-keeper missed a stumping chance. But they settled the missed chance with a wicket, that of Jason Roy, four balls later. Clean bowled.

Joe Root is the new man. Five runs and a wicket from the over.

Shapoor Zadran got the new ball and he started from over the wicket, to Jason Roy. After a dot ball, Roy got a fine egde running down the third man area, but brilliant fielding. Stopped it. Three leg byes.

Then, after a single, Roy played a sumptuous straight drive for the first boundary of the match. Nine from the over.

Amir Hamza, who is also known as Hamza Hotak, started off with a brilliant first over. The left-arm spinner conceded two singles.

Here are the playing XIs

Afghanistan, that's the talking point of 2016 ICC World Twenty20. The Associate team frightened both Sri Lanka and South Africa in their first two matches. But that's not enough for them to stay afloat in a big tournament like this.

England, on the other hand, were unlucky to have run into Gayle force in their opener. Then, they somehow played 'possibly' the match of the tournament to upstage South Africa and revive their campaign.

And today, they take on a fearless bunch of cricketers from Afghanistan. Going by history, it's ought to be a no contest. But this Asghar Stanikzai-led outfit is a different kind of minnows.

Welcome to our live coverage of the match no. 24 of 2016 ICC World Twenty20 between Afghanistan and England, being played at Feroz Shah Kotla, in Delhi.

World T20: How can India qualify for last four – All you need to know