Chasing 154, Oman openers Zeeshan Maqsood and Khawar Ali got the team to a great start by stitching a 69-run stand in just 8.3 overs. 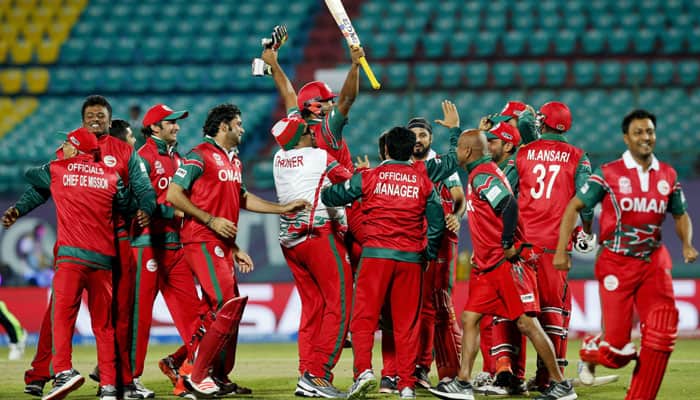 Needing three runs to win off the final two balls, Max Sorensen bowled a bouncer which went over the batsman and the keeper's head for 5 byes.

It's a huge win for the Sultan Ahmed-led side, who are at the bottom in the ICC T20I rankings at number 17.

Chasing 154 to win, Oman openers Zeeshan Maqsood (38) and Khawar Ali (34) got the team to a great start by stitching a 69-run stand in just 8.3 overs. The openers were dismissed by Kevin O'Brien in the ninth and the eleventh overs of the innings.

Oman's middle-order collapsed like a pack of cards and just when it seemed that they were out of match, Jatinder Singh (24) and Aamer Ali (32) resurrected the innings. Ali hit three consecutive fours off Murtagh in the 17th over.

Despite late hiccups, that bouncer proved to be decisive for Oman.

Earlier, Ireland won the toss and chose to bat first.

The decision worked in their favour as skipper William Porterfield and Paul Stirling added 48 runs in 6.3 overs. The partnership was finally broken when Zeeshan Maqsood grabbed a stunning one-handed catch at covers to dismiss Stirling.

Gary Wilson (38) was the highest scorer of the innings and after a rare failure from Neil O'Brien (16) and his brother Kevin O'Brien (14), the Dutch put 154 runs on board.

HP CM's statement has put India to shame, he has given Pakistan a chance to question country's security: Anurag Thakur