A brilliant half-century by Thirush Kamini lifted India to a nine-wicket win over New Zealand and enabled them to take the five-match women's One-Day International (ODI) series 3-2 at the M. Chinnaswamy Stadium here on Wednesday. 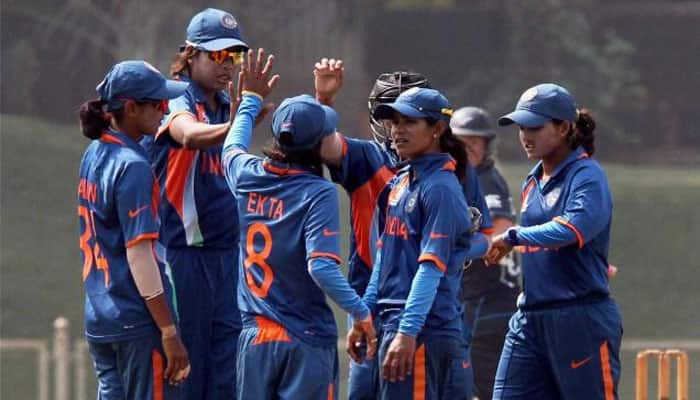 Bengaluru: A brilliant half-century by Thirush Kamini lifted India to a nine-wicket win over New Zealand and enabled them to take the five-match women's One-Day International (ODI) series 3-2 at the M. Chinnaswamy Stadium here on Wednesday.

Barring skipper Suzie Bates (42, 85b, 2x4) and Anna Peterson (22), none of the Black Caps batters stayed long enough at the crease to ensure a challenging total. Bates' dismissal, caught at cover by counterpart Mithali Raj off left-arm spinner Ekta Bisht in the 34th over, effectively curtailed the visitors' innings.

Earlier, Bates and Sophie Devine (18) somewhat retrieved the situation after early loss of wickets by adding 49 runs for the third wicket while Peterson hung around to take the Kiwis past the 100-run mark as they slid from 61/2 to 118 all out.

India responded strongly and though opener Smriti Mandhana (13) fell early after playing a little cameo, Kamini and Sharma, both batting with freedom, carried India to a deserving victory.

Kamini survived a couple of close calls early in her innings, and Sharma batted quite beautifully as they went for their shots at every opportunity to punish a rather wayward Kiwi bowling. Fittingly, Kamini struck the winning runs, a lofted shot that Devine failed to catch and the ball raced to the boundary to trigger celebrations.

On winning back to back matches chasing, Raj said: "Obviously, we are happy to have won the series. Our girls are comfortable chasing. In the earlier matches, our middle-order collapsed repeatedly, but now, our batters seem to be in good form."

Bates said: "Yes, I am disappointed as we wanted to finish the series with a win. But you can't take anything away from the Indians who bowled and batted well in the last two games."

Praise for umpire Joel Wilson on verge of Test debut