More than 250,000 people were expected to descend on the Champs Elysees and the Place de la Concorde, yet the atmosphere was warm and convivial. Security forces kept a distance. 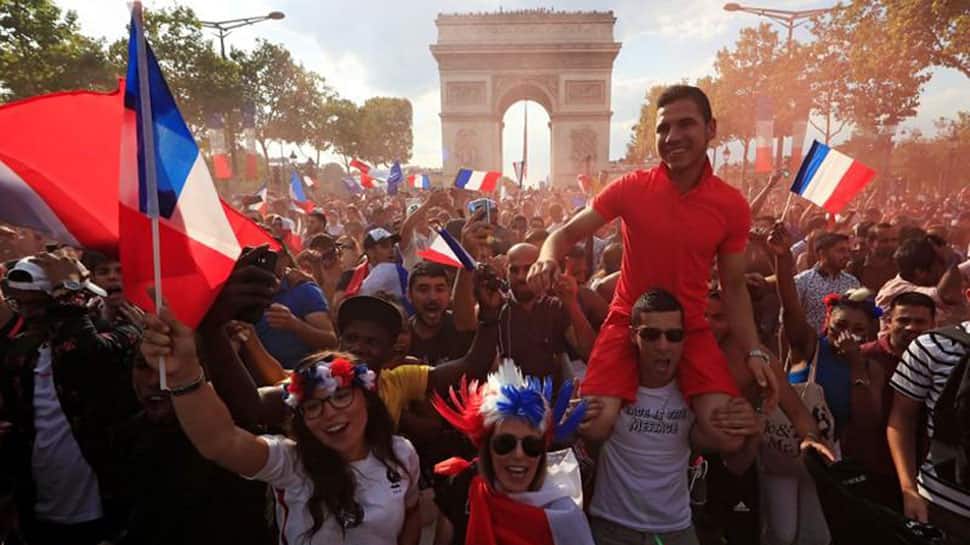 Paris/Moscow: Millions of French soccer fans were delirious with joy on Sunday as France beat Croatia 4-2 to win soccer’s World Cup in a pulsating final in Moscow and spark ecstatic scenes from Paris to Marseille, Bordeaux and beyond.

In the capital, where 90,000 people watched the match on vast TV screens next to the Eiffel tower, there were choruses of the Marseillaise, honking horns and hundreds of thousands of red, white and blue tricolor flags fluttering on the breeze.

The boom of fireworks and firecrackers filled the air, while drivers honked their horns incessantly to celebrate France’s second world title after their triumph on home soil in 1998.

A deafening chorus of “We are the champions, We are the champions” rang out from the Sacre Coeur in the north of the city to the Sorbonne on the Left Bank. Similar scenes erupted in Marseille, Lyon, Lille, Bordeaux and other major cities.

Even before the final whistle, crowds streamed on to the Champs Elysees, the elegant, tree-lined boulevard that runs up to the Arc de Triomphe, the traditional gathering place for celebration, including the Bastille Day parade 24 hours earlier.

“It’s just astonishing what they’ve done,” said Josh, 41, who traveled from Brittany to Paris to watch the match with his girlfriend. “Pogba, Mbappe, Grizou (Griezmann) — they’re on top of the world,” he said, naming three of the standout players.

“We’re the champions of the world! It’s phenomenal, just phenomenal.”

More than 250,000 people were expected to descend on the Champs Elysees and the Place de la Concorde, yet the atmosphere was warm and convivial. Security forces kept a distance.

“To get a second star (World Cup) after 20 years, it’s just brilliant,” said Tommy Hamon, 23, who was working in Le Deauville, a bar on the Champs Elysees.

Even football fans who were not rooting for France but found themselves in the French capital for the game were overcome by the occasion and the scenes of celebration.

“France was not my team but I am so pleased for them today,” said Sarah, a 24-year-old from Birmingham in England who is studying medicine in Paris.

“The players just showed something special all along, something that I liked, and I was not sure they would win today but they did. A lot of people are going to be drunk, if not already.”

In Moscow, where tens of thousands of fans traveled to watch the game, there were tears of joy among the sea of red, white and blue. President Emmanuel Macron, who traveled to Moscow to watch the final with his wife Brigitte, hugged the players after the win and stood with them in the pouring rain.

As the World Cup trophy was brought on to the pitch for the victory ceremony, Macron briefly kissed it and beamed with joy.

“It’s amazing,” said Brioche Pasquier, 57, a French fan inside the Luzhniki Stadium for the match. “I am happy. I arrived in Moscow this morning specially for the final.”

Despite the deluge of rain that struck Moscow right after the game ended, fans danced and sang in the streets and a fireworks display could not be dampened out.

France coach Didier Deschamps was full of praise for his team despite signs of nerves at the start of the game and several missed opportunities during it.

“It is really beautiful. It is marvelous. We did not play a great match, but we showed a strong mental quality,” Deschamps said.

“We also scored four goals. We merit it. I am very happy for this team. We are coming from very far and it has not always been easy, but thanks to hard work, they are here and are on top of the world for the next four years.”