India skipper Virat Kohli on Monday praised his bowlers after they triggered an England batting collapse to hand his side a thumping 246-run win on the last day of the second Test in Visakhapatnam. 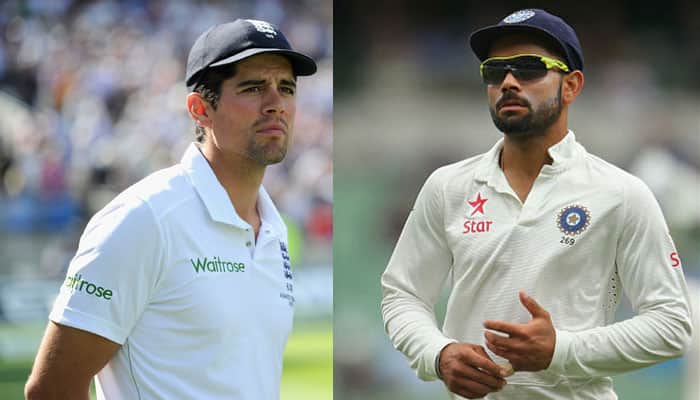 Visakhapatnam: India skipper Virat Kohli on Monday praised his bowlers after they triggered an England batting collapse to hand his side a thumping 246-run win on the last day of the second Test in Visakhapatnam.

India`s spirited bowling stopped England from settling in as the visitors slumped from their overnight 87 for two to 158 all out, just 20 minutes after lunch.

The win put India 1-0 ahead in the five-match series after the first Test in Rajkot ended in a draw.

Premier spinner Ravichandran Ashwin and debutant Jayant Yadav claimed three wickets apiece in the fourth innings of the match to choke England, who were set an improbable target of 405 by their top-ranked hosts.

Pace spearhead Mohammed Shami, who castled skipper Alastair Cook for two in the first innings, also took the key wicket of Joe Root in the morning session to leave England reeling on 79-4.

"Yes, definitely that`s why we play five bowlers, we don`t play only spinners, we play fast bowlers as well, because we understand their contribution is also important," Kohli said on the key role played by pacers.

"I think they are combining really well - all the spinners and fast bowlers - at the moment. So it`s really good for the team. I hope they continue to do their job."

He admitted he was surprised by the English batsmen in the second innings after Cook`s dismissal on the final ball of the fourth day.

"We thought they would come out with more intent to be honest. And to see the approach that they had obviously gave us assurance that once we get a couple of wickets, it will crumble pretty quickly," Kohli told reporters.

He complimented the English side for their "resilience and character", saying they would not take the opposition for granted in the remaining three games.Cook was more measured in his assessment of the Indian bowlers, saying "they are not Supermen by any stretch of the imagination".

"They bowled well. They are good bowlers in these conditions. In Rajkot we got over 700 runs," Cook said of the first Test when the hosts scored 537 after batting first.

At Visakhapatnam, Cook scored a well-crafted 54 and put on 75 runs with rookie Haseeb Hameed to raise England`s hopes of a draw before the Indian bowlers struck.

"This game too in the last innings we made them work really hard for the wickets," said Cook.

England suffered their second biggest loss against India in terms of runs at Visakhapatnam after going down by 279 runs at Leeds 30 years ago.

"It`s a disappointing loss but if we can get ahead of the game then we can put India under pressure, we`ve just got to do that right," said Cook.

"We are still very much in the series. A couple of good tosses will help that, there`s no doubt about that."

The third Test of the five-match starts in Mohali on November 26.