Bayern Munich are eight points clear in the German league table with a tally of 37 from a possible 39. 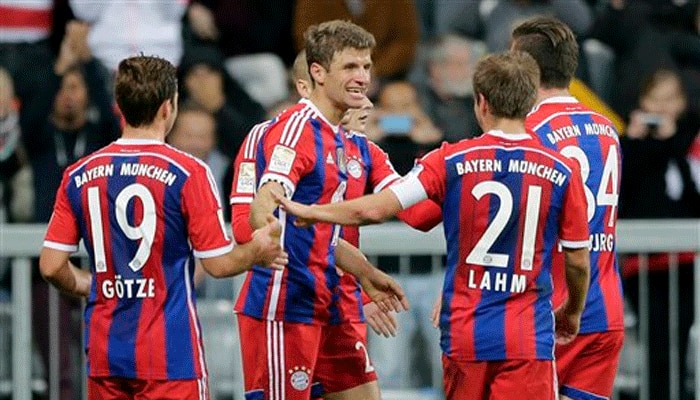 Berlin: Hertha Berlin are looking to end their 38-year wait for a win at Bayern Munich in the Bundesliga when they play at the Bavarians` Allianz Arena fortress on Saturday.

Runaway league leaders Bayern are eight points clear in the German league table with a tally of 37 from a possible 39.

Pep Guardiola`s team have won all of their last seven games at home by at least a four-goal margin and are undefeated in Munich this season in all competitions.

A 2-0 win back in October 1977 was the last time fourth-placed Hertha won in Munich, but their coach Pal Dardai says they have nothing to fear.

"We will work on things in training so that we at least look good there," he told the Berliner Zeitung newspaper.

"They are the best team in the world and it`s a good chance for our players to compare themselves.

"I have great respect for them, but with 23 points in the table, we have no reason to hide down there."

Hertha will have to raise their game substantially after last Sunday`s woeful 1-0 win over Hoffenheim in snowy Berlin when they mustered just one shot on goal.

Bayern`s goal-machine has netted 40 goals in 13 league games so far this season.

A simple 1-0 victory to Bayern marks the clubs` last two meetings and Hertha have won their last two away matches.

Since Dardai took charge in February, Hertha have conceded just 29 goals in 28 league games -- a defensive record second only to Bayern in that time period.

Dutch winger Arjen Robben should be fit having come off in the first-half of Tuesday`s 4-0 win over Olympiakos with a slight leg injury but left-back David Alaba is doubtful having picked up an ankle knock after scoring in last Saturday`s 3-1 win at Schalke.

Caretaker coach Jurgen Kramny will be on the bench in Dortmund and Stuttgart`s 4-0 drubbing at home by fellow strugglers Augsburg last weekend was the final straw.

Dortmund will be looking to bounce back after their shock 3-1 defeat at Hamburg last Friday.

Striker Pierre-Emerick Aubameyang has scored in their last seven home games stretching back to last season. He is the league`s top scorer with 15 goals in 13 league games.

Werder Bremen are at home to Hamburg on Saturday in the north German derby with tensions running high.

Hosts Bremen have won three of their last five games, but are just above the relegation places, and police expect crowd trouble.

Hamburg are tenth, while Bremen are 14th, but league form will count for little in the 103rd derby.

As a result, and in the wake of the Paris attacks, police are stepping up security measures for the game.

Due to the potential for "violent clashes", extra police have been called in and there will be strict controls.

Schalke 04 are at Bayer Leverusen on Sunday with coach Andre Breitenreiter under pressure with his side winless in their last seven games in all competitions.

Both teams are level on 20 points, but are already 17 points behind leaders Bayern.

Leverkusen striker Stefan Kiessling is poised to make his 300th Bundesliga appearance while Javier Hernandez has scored five goals in his last four league games for Bayer.
Fixtures (All times 1430 GMT unless stated)