Benfica inflicted Atletico Madrid's first home defeat in the Champions League since 2009 as they came from behind to move top of Group C with a 2-1 win. 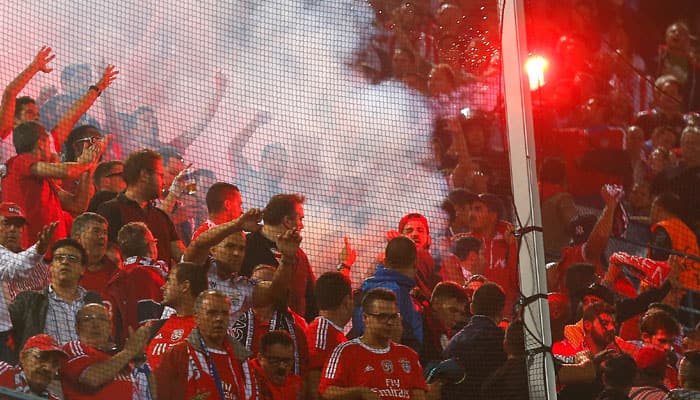 Madrid: Benfica inflicted Atletico Madrid's first home defeat in the Champions League since 2009 as they came from behind to move top of Group C with a 2-1 win.

However, the Portuguese champions' victory was overshadowed by the behaviour of some of their travelling fans, who threw flares at Atletico supporters after Nicolas Gaitan's equalising goal at the Vicente Calderon on Wednesday.

Angel Correa had fired the hosts into a deserved lead midway through the first half.

However, Atletico were made to pay for a series of missed chances as Gaitan levelled and Benfica snatched all three points with a brilliantly executed counter-attack finished off by Goncalo Guedes just after the break.

"The flares are a social problem that other people have to resolve," said Atletico coach Diego Simeone.

"On the pitch Benfica played a competitive game and deserved the victory for their effectiveness in front of goal.

"The team looked to create throughout the game, but football is about the chances you take, not how many you create."

Benfica boss Rui Vitoria hailed his side's defending, but dismissed suggestions they already have one foot in the last-16.

"It is a sweet victory against a very hard team that were in the Champions League final two years ago," he said.

"The team knew how to ride out the difficult moments.

"It is not the moment to get over-confident. Six points is a very good start, but nothing has been achieved yet."

Atletico produced their most impressive opening 45 minutes of the campaign, but their profligacy in front of goal proved their downfall as they failed to kill the game off.

Atletico went in front on 22 minutes thanks to a great team move started and finished by Correa as he blasted home Antoine Griezmann's cute layoff.

Simeone's men should have been out of sight by half-time as Martinez headed against the bar and then Correa fired over with an open goal after Julio Cesar had smothered another Martinez effort.

However, Benfica turned the game on its head nine minutes before the break when Nelson Semedo's cross was only cleared as far as Gaitan and the long-time Atletico transfer target showed why he is a man in demand with a brilliant left-footed finish into the far corner.

The goal sparked angry scenes on and off the field as Benfica fans hurled flares onto the Atletico fans sitting in the tier below them.

The game was quickly restarted by Italian referee Gianluca Rocchi, but the Portuguese club are likely to face further action from UEFA.

That goal was the first Atletico had conceded at the Calderon in seven Champions League games stretching back to March 2014.

And they were caught out again just six minutes into the second half by a blistering Benfica counter-attack as Gaitan picked out a Guedes run at the back post and he squeezed a shot past Oblak from a narrow angle.

The final 35 minutes were played almost exclusively in the Benfica half as Atletico attempted to prevent a first home defeat in the Champions League under Simeone.