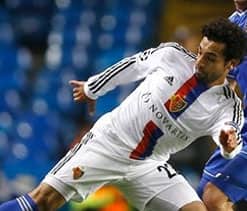 London: New signing Mohamed Salah wants to blaze a trail for Arab footballers during his time with Chelsea, the Egypt winger said on Friday.

The 2012 European champions signed the 21-year-old from Swiss club Basel this week as a replacement for Juan Mata following the Spain playmaker`s move to Manchester United.

"This is different because not many Arab people have played in Europe for the big teams and maybe many people there will now follow me," Salah told the club website (www.chelseafc.com).

"From Egypt maybe nobody went to a high step yet so this is different. Going to Chelsea is fantastic for anyone and I hope I can play here always and have a good career."

Salah was this week named the Swiss Football League Player of the Year by a panel of managers, captains and journalists and was voted by fans as their favourite player.

He was also the choice of his peers last month as the recipient of the Swiss Golden Player award.

"It has been a very good year because this is the first year of me playing in Europe," said Salah who scored for Basel against Chelsea in two Champions League group matches earlier this season.

"It is very difficult for any player playing in Europe but now in this second year I am playing at Chelsea. It is not easy playing for Chelsea - we have very good players playing in my position but I will do my work hard and we will see."

Salah is one of three major signings made by manager Jose Mourinho in the January transfer window, the others being Serbia midfielder Nemanja Matic from Benfica and France Under-21 defender Kurt Zouma from St Etienne.

Zouma signed for Chelsea on Friday and was immediately loaned back to St Etienne for the rest of the season.