After France soaked up a heavy spell of German pressure, the hosts got the breakthrough in first-half injury time when Schweinsteiger handled. 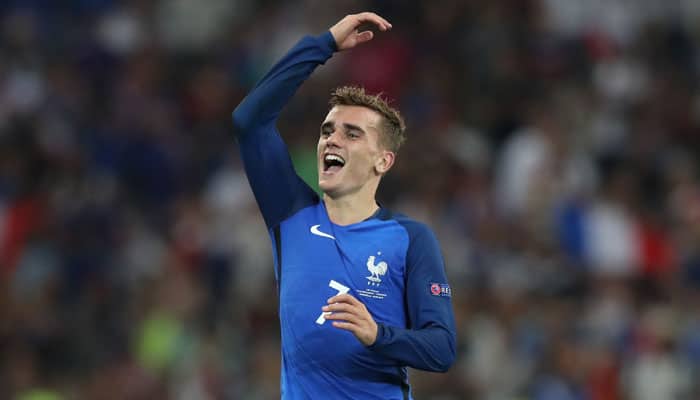 Bouches-du-Rhône: He rejected comparisons with Michel Platini but Antoine Griezmann is fast becoming a France legend after a two-goal haul against Germany fired the hosts into Sunday`s Euro 2016 final against Portugal.

Amid the controversial absence of Real Madrid striker Karim Benzema, France have found a new hero in the diminutive striker.

With six goals already in his first European Championships, Griezmann is only three short of equalling Platini`s record of nine goals at the 1984 tournament.

The 25-year-old Atletico Madrid forward showed grit, courage and an embarrassment of skill on his way to a second man-of-the-match performance in the 2-0 victory.

"He`s a great player. He showed what kind of generous player he is tonight," said France coach Didier Deschamps.

"In this Euro, he`s been decisive for us. He can score, and he can help others score."

Benzema, who was sidelined from the squad before the tournament over his alleged role in the sextape blackmail of teammate Mathieu Valbuena, tweeted his congratulations to the team on Thursday. "Come on, just one match to go!!!" he said.

But Benzema could not be further from most fans` thoughts.

Now, Le Bleu is Griezmann -- and in Marseille he was ruthless.

In the Champions League final in May, Griezmann missed a first-half penalty for Atletico. City rivals Real Madrid went on to capitalise, and won their 11th European title in Milan.

On Thursday, he coolly scored the penalty after a Bastian Schweinsteiger handball.

"I wanted to take a penalty again in an important moment and I`m happy I did, and happy I scored," he said.On Sunday, Griezmann has the chance to take revenge for the Champions League defeat by beating Portugal and stopping Real striker Cristiano Ronaldo from securing one of the few trophies he still lacks -- a major finals title with Portugal.

Griezmann was electric from the outset in Marseille, with his movement, passing and eye for goal helping create a great chance when he danced into the area to force Manuel Neuer down low to save one-handed.

After France soaked up a heavy spell of German pressure, the hosts got the breakthrough in first-half injury time when Schweinsteiger handled.

Barely six weeks after his Milan howler, Griezmann stepped up with confidence against arguably the best goalkeeper in the world -- and promptly sent Neuer the wrong way as he smashed the ball into the top left-hand corner.

"He took his responsibilities well, to take the penalty and slam it in the back of the net," said France striker Olivier Giroud, who like Benzema has been left in the shade by the little forward who has spent his entire professional career in Spain, initially with Real Sociedad.

"He`s lethal when he`s in the penalty box, and he got his second goal. He`s our little Mr Extra," Giroud said.

While Griezmann was deadly, Giroud`s lack of pace cost him a clear chance against Germany.

But Griezmann has more than one string to his bow.

Tracking back to help defend, he was among the first players to recover the ball when France`s defence cleared.

There were deft touches, blind passes and fantastic turns, but Griezmann`s eye for goal is his defining quality.

His second goal came after 72 minutes when Juventus star Paul Pogba conjured some magic to lose his marker and his cross had Neuer, and Germany`s defence, in a panic.

Griezmann, who scored an impressive 32 goals for Atletico last season, simply knew where he had to be when Neuer punched the ball to his feet, and he poked it in.

"For the second goal I was hanging back to wait for an error from the goalkeeper," said Griezmann.

"He has now taken over the leadership of our attack and has become indispensable for us."

For Pogba, the goal he created for Griezmann completed a "beautiful" night in front of 65,000 fans.

"I just crossed it, `Grizou` was there, it was beautiful, in the Velodrome. Honestly, football is just great," said Pogba.