Borussia Dortmund staged a late comeback from two goals down to draw 2-2 with troubled VfB Stuttgart on Wednesday as they continued their stuttering start to the Bundesliga season. 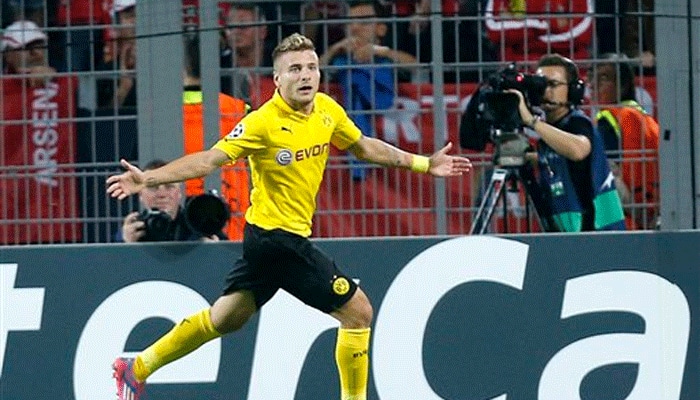 Berlin: Borussia Dortmund staged a late comeback from two goals down to draw 2-2 with troubled VfB Stuttgart on Wednesday as they continued their stuttering start to the Bundesliga season.

The visitors, who had sacked sports chief Fredi Bobic hours earlier, looked to be cruising to their first win of the campaign when Daniel Didavi struck twice early in the second half for a two-goal cushion.

But goals from Pierre-Emerick Aubameyang in the 73rd and Ciro Immobile in the 86th minute helped avoid what would have been Dortmund`s third loss in five games.

"We won 2-2," Dortmund coach Juergen Klopp told reporters. "I can live with the result but not so much with how we did it.

"In the end we did manage to make it into a game to remember. The fans were great and very sensible given our (injury) situation."

Dortmund, who were missing their entire first choice midfield through injury, are on seven points, four behind leaders Bayern Munich, who beat Paderborn 4-0 on Tuesday. Stuttgart moved off the bottom spot and into 17th place after scoring for the first time this season

Hit by a string of injury absences, Dortmund lacked any attacking edge for most of the game and had also Stuttgart keeper Sven Ulreich to thank for completely misjudging a cross that led to their equaliser.

The hosts did have the first real chance with Shinji Kagawa chipping the ball onto the cross bar in the 33rd minute.

The 24-year-old Didavi, however, punished Dortmund`s sluggish defending when he was left unmarked in the box to slot in three minutes after the restart.

The midfielder then doubled their lead when Marcel Schmelzer`s clearance landed at Timo Werner, who found Didavi for an easy tap in.

Klopp, who became the longest serving Dortmund coach with his 209th Bundesliga game on their bench, saw his team spark to life after the second goal and Aubameyang cut the deficit with a darting run.

Dortmund captain Mats Hummels came on as a late substitute for his season debut but again it was Stuttgart who came close with Vedad Ibisevic firing over the bar with keeper Roman Weidenfeller beaten.

But when Ulreich failed to save Schmelzer cross, Italian Immobile was on hand to score.

Bayer Leverkusen bounced back from last week`s 4-1 loss to VfL Wolfsburg to edge past Augsburg 1-0 and move up to second place on ten points.

Despite an eight-minute interruption due to a lightning storm, Leverkusen won their first match after two defeats in the league and the Champions League courtesy of Son Heung-min`s first half goal.

Hanover 96 joined them after they beat promoted Cologne 1-0, who conceded their first goal of the campaign, while Hamburg SV made it five games without a goal when they lost 1-0 at Borussia Moenchengladbach to drop to last place.

Argentine coach suggests that Tevez recall is on the cards