Football star Samuel Eto'o was honoured Monday for his "inspiring" stand against racism, as the organisers behind the award warned that prejudice still stalked the game in Europe. 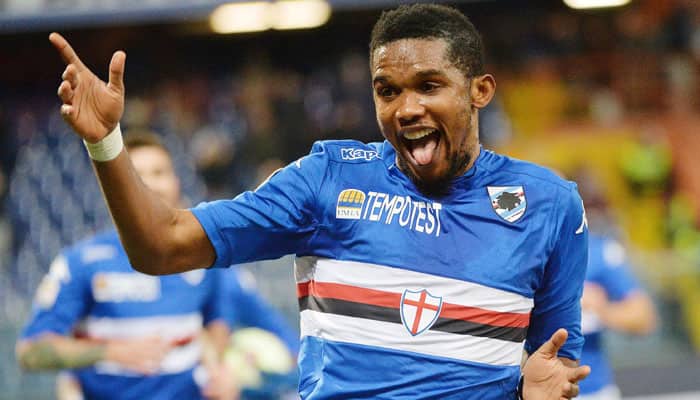 London: Football star Samuel Eto'o was honoured Monday for his "inspiring" stand against racism, as the organisers behind the award warned that prejudice still stalked the game in Europe.

The former Cameroon and Barcelona striker received the Medal of Tolerance from the European Council on Tolerance and Reconciliation (ECTR) at a gala dinner at London's Kensington Palace.

Eto'o, who now plays with Sampdoria in Italy, famously tried to walk off the pitch during a Spanish match in 2006 due to the racist abuse he was suffering.

"Since that day, I decided I will stand up and fight against abuse," he said after receiving his award, with Chelsea winger Eden Hazard, Liverpool defender Kolo Toure and former Barcelona midfielder Deco looking on in support.

"The only path is to stand up and shout."

The four-time African Player of the Year urged footballers to take a moral stand.

"Only we can make it stop. Because for certain, nobody is going to do it for us," the 33-year-old said.

He also urged authorities to issue stiff punishments for those caught in the act.

Eto'o started out with Real Madrid but made his name with Barcelona, before moving on to Inter Milan, Chelsea and Everton.

In 2005 while playing for Barcelona, Eto'o was heavily racially abused by Real Zaragoza fans, who made monkey chants whenever he touched the ball.

The following year, when again being abused by Zaragoza supporters, Eto'o tried to walk off the pitch, telling the referee "no more", before his team-mates persuaded him to complete the match.

The ECTR is a non-governmental organisation founded in 2008 which promotes understanding between communities and monitors xenophobia in Europe. It is largely made up of European former presidents and prime ministers.

The council's president Moshe Kantor, also the president of the European Jewish Congress, said recent racist incidents among football supporters showed the problem was still "very much alive and well" in the game.

"There is a very strong crisis in Europe of racism, radicalisation, neo-Nazism and anti-semitism," he told AFP, citing events in Paris, Belgium and Copenhagen.

Kantor said when these things were present in society, they also manifested themselves in football stadiums.

"We can no longer pretend that hate is a marginal issue in Europe."

He said after French footballer Nicolas Anelka performed the "quenelle" hand gesture, which looks like an inverted Nazi salute, people all round the world saw it and searched for it online because the sport is so hugely popular.

"That's why we decided that we have to turn this interest into something positive," he said, and highlight Eto'o's "inspiring" and courageous stand.

"Samuel Eto'o is well-known as not only a victim of racism but also as a hunter against racism," he told AFP.

Now retired from international football, he is Cameroon's top goalscorer with 56 goal from 118 appearances, and has won the Africa Cup of Nations twice as well as an Olympic gold medal.

The ECTR's first Medal of Tolerance was conferred in 2010 on king Juan Carlos I of Spain, with the second given jointly to Croatian president Ivo Josipovic and former Serbian president Boris Tadic.