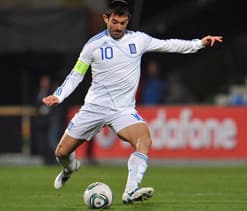 Athens: The fighting spirit of Giorgos Karagounis has helped long suffering Greeks seek solace from financial crisis in the exploits of their national team.

To the outsider their style may not be aesthetically pleasing. But to Greeks their grit and determination has set an example for the daily grind, and none more so than iconic captain Karagounis.

The 37-year-old midfielder -- Greece`s most capped player -- will tackle his last campaign in the World Cup finals in a group that offers his team a chance to achieve another exploit in taking them into the second round for the first time.

Greece are drawn in Group C with Colombia, Ivory Coast and Japan. And they fancy their chances.

While Kostas Mitroglou will be the player they look to to provide goals, it is his Fulham team-mate Karagounis -- who has also played for Panathinaikos, Inter Milan and Benfica -- who is the soul of the team.

"It is very important that we qualified for this World Cup. It is important to make Greeks proud, and for them to enjoy watching their country play at the world stage. For the players, it is an incentive," Karagounis told Sky Sports in March

However, for Karagounis success is not about personal glory, but giving some respite to the people back home just as he did when he scored the only goal in a crunch Euro 2012 game against Russia.

The victory saw the Greeks once again upset the odds and progress out of their group at the more favoured Russians expense.

For Karagounis, it came at a personal cost as a booking in the game saw him suspended for the high-octane quarter-final against Germany, who were seen as the bad guys for Chancellor Angela Merkel`s conditions for bailing out the Greek economy.

Karagounis`s despair when he was booked and realised what it meant was one of the most heart-wrenching images of the championships.

For the Greeks it rivalled the tears of England midfielder Paul Gascoigne when he was booked in the 1990 World Cup quarter-final and was suspended for the semi-final with West Germany.

"Beating Russia and getting into that quarter-final with Germany was a great achievement," he told The Guardian last year.

"In terms of what we were up against, it was almost up there with what we did in Portugal winning the competition (Euro 2004). It was us against everything. We had a duty to put a smile on people`s faces back home.

"There was a desperation for us to do well. We had to give people something positive to cling to."

Karagounis, who was also suspended for the Euro 2004 final having got them off to a winning start with the only goal in the opening group game against hosts Portugal, is painfully aware of how lucky he is compared to the majority of his compatriots.

"I`m luckier than most in Greece," he told The Guardian.

"When you see your friends with the smile wiped from their face, not having enough to provide for their families, to buy food from the supermarket -- You can`t live your life oblivious to that, knowing how they`re struggling back home. It`s there all the time. Nagging at you. There is no escaping."