Bollywood hasn't done any favour on me by making a biopic: Milkha Singh hits back at Salim Khan

Meanwhile, celebrities like actress-politician Kirron Kher and filmmaker Sooraj Barjatya have defended the IOA's decision to appoint Salman as the face of India at Rio Olympics. 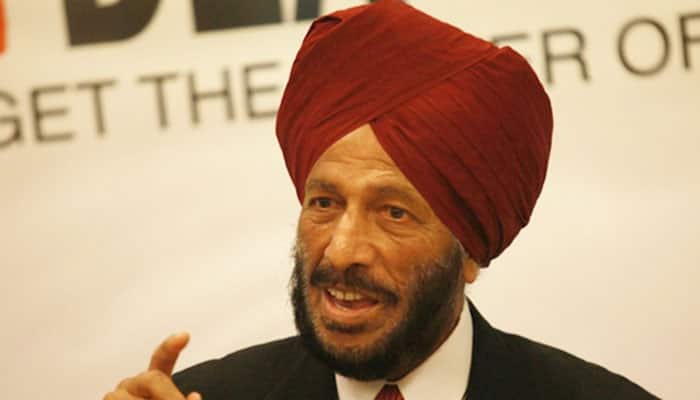 New Delhi: Indian athletics legend Milkha Singh on Tuesday hit back at Bollywood superstar Salman Khan's father Salim Khan by saying that the movie industry hasn't done any favour by making a film on him.

Salim has tried to defend his son's appointment as the goodwill ambassador of the Indian contingent for the Rio Olympic Games.

The move to appoint Salman was questioned by several members of the Indian sports fraternity, including Milkha and 2012 London Olympics wrestling bronze medallist Yogeshwar Dutt.

In his bid to defend his son, Salim tweeted on Monday: "Milkhaji it is not Bollywood it is the Indian Film Industry and that too the largest in the world. The same industry which resurrected you from fading away in oblivion."

Salim referred to the soaring popularity the 80-year-old Milkha achieved after the release of a biopic on him named "Bhaag Milkha Bhaag".

In reply to this, Milkha repeated the comments he had made two days ago.

"Let him (Salim) have his views. I don't have anything to say regarding this. I have already put in my views. All the members of the Olympic contingent are our ambassadors," the multiple Asian champion was quoted as saying by Times Now news channel.

"The IOA should have thought of what's the need of the ambassador. I'm saying that the team who all are going whether it is shooting, wrestling, boxing or athletics, they all are our ambassadors. Out of 120 crore people in India, they have been our ambassador then what is the need of any other ambassador?

"It doesn't make sense to appoint someone in this role. If an ambassador is required, we have many great sportspersons, like Sachin Tendulkar, P.T. Usha, Ajitpal Singh, Rajyavardhan Singh Rathore," he added.

Milkha, who finished fourth in the 400 metres sprint at the 1960 Olympics, continued: "It's okay they have made a film on me. I don't think that the movie industry has made a favour to me by making a film on my life.

"If they have any function, will they put any sportsmen as their chairman or ambassador? I gave my story for Re.1 and it is not a little thing. The movie made crores.

"If Salman Khan's father is saying that Milkha Singh has said anything wrong, then I don't agree to it, because the entire nation is saying that I am right and they are with me."

Meanwhile, celebrities like actress-politician Kirron Kher and filmmaker Sooraj Barjatya have defended the IOA's decision to appoint Salman as the face of India at Rio Olympics.

"It is a very good decision. I am very proud of Salman Khan. All people who are trying to say that only a sportsman should be appointed as an ambassador, I would like to differ from them," Kirron said at the Dadasaheb Phalke Excellence Awards event here.

"No need to think that only a sportsman can represent the country. Any eminent personality who inspires us can be a brand ambassador. I welcome the decision."

"I would request the sports fraternity to be more magnanimous. Be a good-hearted person and give Salman his due respect. We actors are also hard workers and give our best," Kirron added.

Barjatya, who has delivered numerous hits like "Prem Ratan Dhan Payo" with Salman, was also present at the event. He said: "It's a matter of great happiness because there is no one more just and appreciative like him. He has always been a sports lover, he plays good cricket, football and is a good cyclist. I know him closely so, I'm very happy for him."

When filmmaker Karan Johar was asked about the controversy at the wrap-up party of his production "Baar Baar Dekho", he said: “I love Salman Khan. Whatever he does, he is the best for it.”

Sidharth Malhotra said: “I don’t know much about the controversy. As far as the Olympics are concerned, people who made the decision might have made the right decision. He is a man who is known for his fitness. The authorities who selected him, I am sure they thought of something.”

Actress Katrina Kaif, who was romantically linked to Salman at one point of time, said: “A controversy with Salman, is it a new thing?”