India thus became the only other nation than Germany to have won the title more than once. India last won the title way back in 2001. 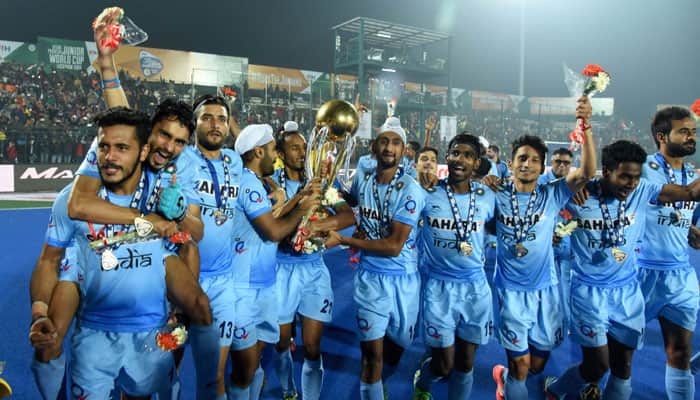 Indian colts defeated Belgium 2-1 in the Lucknow final. India, as expected, dominated the game and by the half-time hooter, the score-line read 2-0 in hosts' favour.

The visitors scored a consolation goal in the dying minutes before the young Indian team, in unison with the packed crowd, start their celebration at the Major Dyan Chand Astroturf stadium.

India thus became the only other nation than Germany to have won the title more than once. India last won the title way back in 2001, 15 years ago.

Congratulations to Team India & supporters as India lifts the #HJWC2016 by beating Belgium in the finals. Well done! @TheHockeyIndia

But the best message, as usual came from Virender Sehwag. Here's what he said,

The skipper Harjeet, however, was not done with the win. He said the current team will "give a lot of joy" to the countrymen in near future.

"I would like to thank all the players who aimed to win this trophy. Everybody has put in a lot of hardwork under discipline. We all had one aim and we thankfully managed to achieve that today," an emotional Harjeet said at the post-match press conference.

"The crowd support gave us a lot of confidence but we played according to our structure which we have been implementing for the last two-and-a-half years. This team is going to give a lot of joy to you all in the future," he said.