The government would also award Rs 50 lakh to Sindhu's coach Pullela Gopichand for mentoring her, he said. 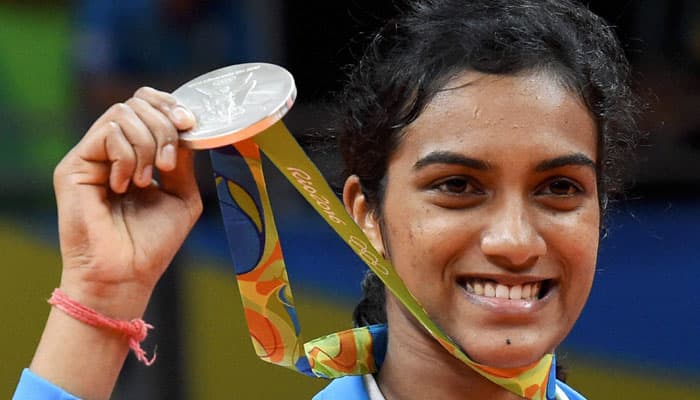 Vijayawada: Andhra Pradesh government today announced a slew of rewards, including a cash award of Rs 3 crore, to shuttler P V Sindhu who just clinched a silver medal in the Rio Olympics.

"We will give her 1,000 sq yds of house site in the state's new capital Amaravati and also a Group-1 officer post in the state government. She can choose the post she wants," Chief Minister N Chandrababu Naidu said.

The government would also award Rs 50 lakh to Sindhu's coach Pullela Gopichand for mentoring her, he said.

"Sindhu has become a pride for all Indians. To enhance this, we are announcing the rewards. We had been honouring sportspersons who brought glory to the country," Naidu said, recalling the rewards given to Karnam Malleswari, Gopichand and others in the past.

The state Cabinet, which met under Naidu's chairmanship here today, congratulated Sindhu on her inspiring win in the Olympics.

"She brought an unprecedented honour to the country," the Chief Minister remarked.

Sindhu, the two-time World championship bronze medallist, became the first Indian woman player to win a Silver in the Olympics and fifth woman player from India to win a medal in Olympics.