Racing against time to get back to full rhythm, she showed her potential in the Federation Cup when she erased Rachita Mistry's 16-year-old record by clocking 11.33s in April. 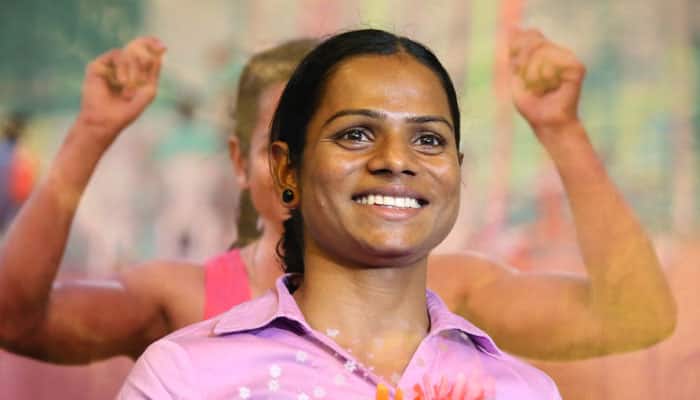 Kolkata: Putting a past "full of darkness" behind her, India's only second female sprinter to qualify for 100m in Olympics, Dutee Chand now wants to win a medal at Rio for the scores of innocent poor athletes who face similar discrimination in their lives.

Dutee will be only the second Indian woman sprinter to participate in the Olympics after PT Usha, who competed in the 100m and 200m at the 1980 Moscow Games - but the first since qualification standards were introduced at the 1988 Seoul Olympics.

"I'm no more afraid of challenges in life. The bigger the competition, the better is my timing," Dutee, who was banned two years back for having excess levels of male hormone testosterone, told PTI in an interview from Hyderabad.

"Everyone has ups and downs in life. For me, the past was full of darkness. I don't want to look back again. It's about doing well in Rio.

"I have not set a timing for me. No athlete can predict the timing but I've confidence to do well and who knows where I will stand," he added.

Two years back life had come to a standstill for Dutee when she was banned for an indefinite period under the guidelines of the International Association of Athletics Federation (IAAF) that debar athletes with hyperandrogenism -- excessive but naturally occurring testosterone -- in the women's category.

The daughter of weavers from Chaka Gopalpur village of Jajpur district in Odisha, Dutee was dropped from India's contingent for the Glasgow Commonwealth Games and the Asian Games in Incheon after her naturally-occurring testosterone levels were found to be in breach of IAAF's guidelines.

But instead of giving up Dutee decided to challenge the ruling at Lausanee-based Court of Arbitration for Sport's. Supported by an Indian researcher and gender activist Payoshni Mitra, she successfully challenged the IAAF's hyperandrogenism guideline at CAS, which suspended the policy in its verdict last year, allowing the sprinter to return to action again.

"I've not committed any wrongdoing in my life. And a good show in Rio will be a victory not only for me but scores of other innocent poor athletes who don't have money and support to fight for themselves," said Dutee, who has six siblings.

After being cleared last year, Dutee, who had a prolonged

absence for about a year, had little time to achieve the Olympic standard as she had to plead for support to fund her US exposure trip, something that never materialised.

Racing against time to get back to full rhythm, she showed her potential in the Federation Cup when she erased Rachita Mistry's 16-year-old record by clocking 11.33s in April.

But at the Asian Grand Prix in Patiala next month she missed the Olympic qualification mark by one-hundreth of a second and also failed to make the cut in various other meets outside the country.

Dutee bettered her time twice in a day -- from 11.30s to 11.24s -- en route to a silver medal in Almaty, Kazakhstan last month to qualify for an event where no one competed after the legendary PT Usha.

"It's a big honour for me. I'm giving my best to prepare. I'm running short sprints of 40, 50m and and sometimes 200m to test the endurance. My finishing has improved," Dutee said.

"There's something about the atmosphere -- including the food -- that brings out the best in me. I'm looking forward to eat well, train well and do well in Rio," Dutee, an avid fish eater, added.

Dutee is now looking forward to get a clearance for her personal coach Nagapuri Ramesh so that he can accompany her to Rio.

"It will be a big relief if he goes. From logistical problems to giving tips on the track he helps me in every way," she said.

Dutee, who has the same five-feet frame as that of double Olympic champion Shelly-Anne Fraser-Pryce , hopes for a selfie-moment with her Jamaican idol.

"It can't be better than getting a selfie with Shelly-Anne and Usain Bolt," she signed off.