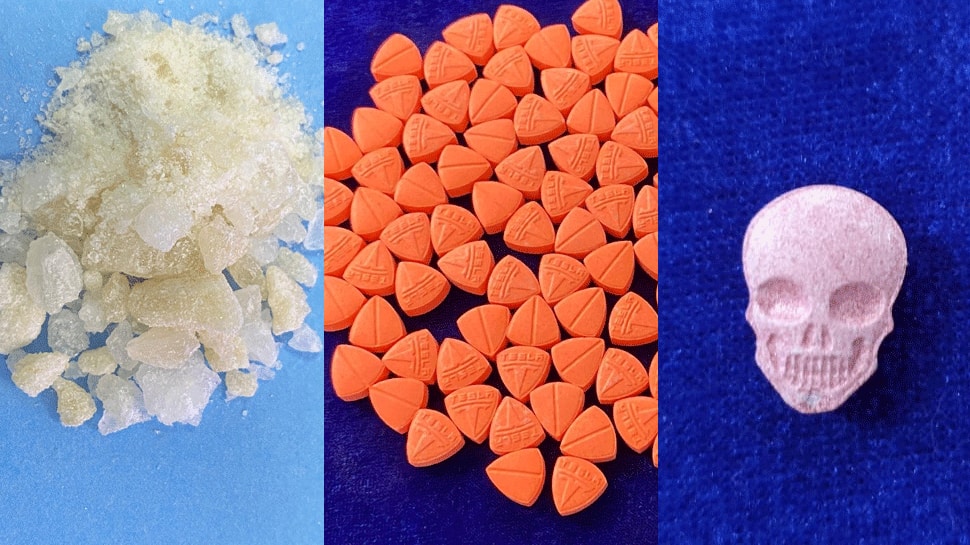 The first parcel which arrived from Germany contained two plastic pouches that had 100 red colour and 50 blue colour MDMA pills concealed in them. The red colour pills were embossed with the logo of e-vehicle major Tesla, whereas the blue ones had the logo of the gaming company EA Sports.

The first parcel contained contains 224 mg of MDMA and latter 176 mg of MDMA. 100 peach colour MDMA pills were found in the second parcel, which had arrived from the Netherlands. These pills were in the shape of a human skull known as MY BRAND/ Totenkopf Skull and contain 248 mg MDMA.

The third parcel (consigned from the Netherlands) contained 26 pink colour pills of MDMA that were marked with Jurassis and had an image of a Dinosaur on it. They contain around 300mg MDMA.

Any dosage over 120 mg of MDMA is considered lethal. The fourth parcel on examination was found to contain 7 grams of MDMA Crystal.

“After the nationwide lockdown in late March, given the unavailability of liquor and other intoxicants, we have seen frequent attempts to smuggle drugs in via Foreign post.  Especially, Synthetic drugs and crystals of high dosage, most of which are coming in from Europe. While we have earlier tracked down smugglers to other states and districts this is the first time, we have traced users down to Auroville, which is near Pondicherry” Rajan Chaudhary, Commissioner Customs said.

Follow up searches later led to the detention of an individual to ascertain his role in the parcels that were consigned for Chennai city.

In Villupuram, the consignee was found to be a young Indian lady, who works as a volunteer in Auroville. She has been detained to ascertain her role in the smuggling.