According to reports, a large number of locals gathered at the encounter site and shouted ''Hyderabad Police Zindabad'' and ''Telangana Police Zindabad.'' 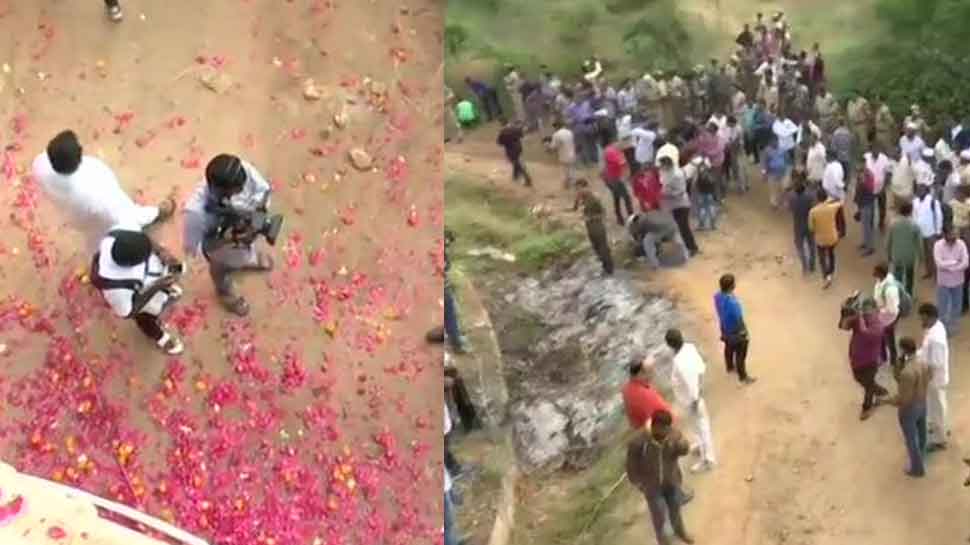 HYDERABAD: The local residents of Hyderabad on Friday hailed the policemen after the four accused in the gang-rape and gruesome murder of a government veterinarian were killed in an encounter earlier this morning. According to reports, a large number of locals gathered at the encounter site and shouted ''Hyderabad Police Zindabad'' and ''Telangana Police Zindabad.''

#WATCH Hyderabad: 'DCP Zindabad, ACP Zindabad' slogans raised near the spot where where accused in the rape and murder of the woman veterinarian were killed in an encounter by Police earlier today. #Telangana pic.twitter.com/2alNad6iOt

Some of them even showered rose petals on the police officials who had reached the encounter site to take stock of the situation.

Hyderabad: Locals had showered rose petals on Police personnel at the spot where accused in the rape and murder of the woman veterinarian were killed in an encounter earlier today pic.twitter.com/66pOxK1C2b

The neighbours of the woman veterinarian tied rakhi to police personnel after the four accused were killed in an encounter here.

Hyderabad: Neigbours of the woman veterinarian, tie rakhi to Police personnel after the four accused were killed in an encounter earlier today pic.twitter.com/ltNsBLOPO6

Around 3 am, all the four accused -  Mohammad Areef, Jollu Shiva, Jollu Naveen and Chintakunta Chennakeshavulu - had been taken to the spot for recreation of the crime scene when they tried to escape. When the police asked them to surrender, they started pelting stones, forcing the policemen to open fire in self-defence during which they were killed.

Bahujan Samaj Party chief Mayawati also hailed the Telangana Police after the four accused in the gang-rape and gruesome murder of a government veterinarian were killed in a police encounter in the wee hours in Hyderabad.

The Hyderabad gangrape and murder case had triggered a nationwide protest and renewed demands for capital punishment for the accused in such heinous crimes. The 26-year-old veterinary doctor was allegedly smothered, gang-raped and then burnt by four men and her charred body was found the next day on November 28 under a culvert on the Hyderabad-Bengaluru national highway.

Against the backdrop of the gruesome incident, the Telangana government said cases of crimes against women and missing women should be registered immediately by police on receipt of a complaint by following the 'Zero FIR' system.

Last week, three cops were suspended over alleged negligence in filing the FIR in connection with the rape and murder of the veterinarian.