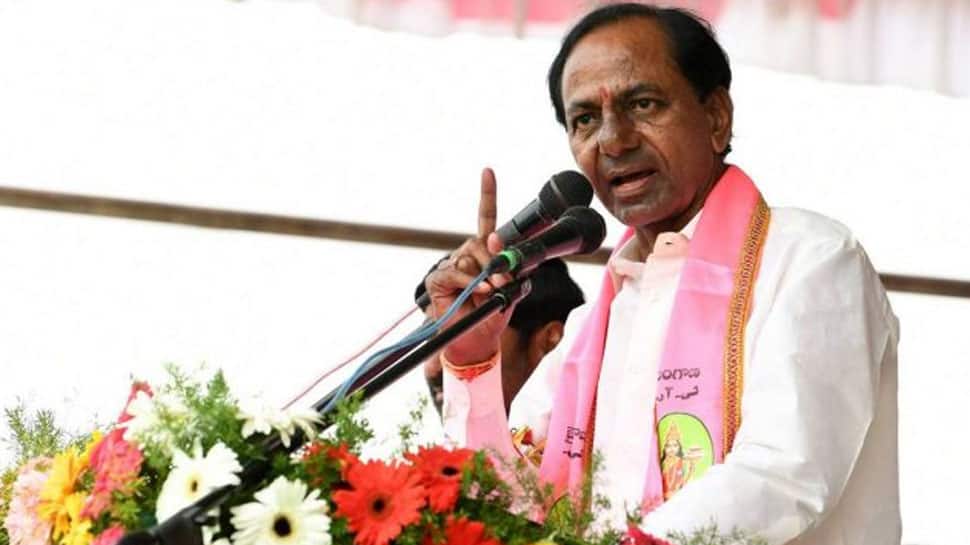 A simple swearing-in ceremony was held at the Raj Bhavan for the Telangana cabinet expansion which saw only ten ministers taking the oath of office and secrecy.

However, in a surprise move, Telangana Chief Minister out his son KT Rama Rao and nephew T Harish Rao during the cabinet expansion.

Andhra Pradesh and Telangana Governor ESL Narasimhan administered the the oath of office and secrecy to the newly-inducted ministers at Raj Bhavan in the presence of the Chief Minister.

After the expansion, the strength of Telangana council of ministers has risen to 12.

On December 11, 2018, the Telangana Rashtra Samithi came back to power after winning 88 seats out of 119 assembly seats. Two independent MLAs had pledged their support to TRS after the results, taking the TRS tally to 90.

On December 13, KCR took oath as Chief Minister along with Mahmood Ali (Home Minister) were sworn in.

For more than two months, KCR kept everyone, including his partymen, MLAs and his own powerful political family members, guessing.

However, Tuesday's Telangana cabinet expansion turned out to be a one-man-show.

KCR's son Kalvakuntla Taraka Rama Rao, who is also popularly known as KTR, was recently elevated in the party as TRS Working President. Surprisingly, he was not inducted in the ministry.

KTR, considered as no 2 in the TRS, held all powerful portfolios of Municipal administration, IT, Mining etc earlier.

Along with KTR, KCR's nephew and another high-profile family member, T Harish Rao, was also not inducted in the ministry.

Harish Rao was holding powerful Irrigation portfolio in the earlier government and was equally powerful as KTR.

The rumour mill is working overtime as to why KCR did not induct his son KTR and Harish Rao as ministers in his cabinet.

Several reasons are being attributed to their non-inclusion in the cabinet. One of them is that KCR wants to keep both of them in check and, the other being that he wants to use their services for the upcoming Lok Sabha election 2019 during which the TRS aims to win at least 16 out of 17 Lok Sabha seats in Telangana with the sole exception of Asaduddin Owaisi, for whom the Hyderabad seat has been left.

Also, no woman MLA has been able to make it to Telangana cabinet this time too.

In KCR's previous government, (from 2014-18), there was no woman member in the cabinet and this continued even now.

From 2000 to 2014, KCR had faced several ups and down, but after 2014 elections, when TRS came to power, he had established himself as the no. 1 in Telangana politics.

Further consolidating his position after 2018 assembly elections, KCR has now become invincible in Telangana politics and literally controls his party.

Another interesting factor which emerged out of Tuesday's cabinet expansion is that none of those sworn-in were given crucial portfolios like Finance, Irrigation, Municipal Administration, Legislative Affairs, etc.

KCR has kept all important portfolios with himself. The CM has also kept six ministerial berths vacant, keeping everyone guessing even now.

The permitted number for council of ministers is 18 while 12 slots have been filled till now.

With NDA on one side and the 'Mahagathbandhan' on the other, KCR's ''Federal Front'' idea hasn't found many takers in national politics at present.

KCR keenly wants to keep himself relevant in the national politics after the 2019 Lok Sabha election.

As of now, KCR's ''one-man show'' in Telangana continues and only time will tell whether he will be dark horse in national politics after 2019 elections.