A packed opening night in Mexico for 1st ever Indian Film Festival presented by Embassy of India and Zee Mundo!

Chennai Express will premiere this week followed by Dil Dhadakne Do and English Vinglish. 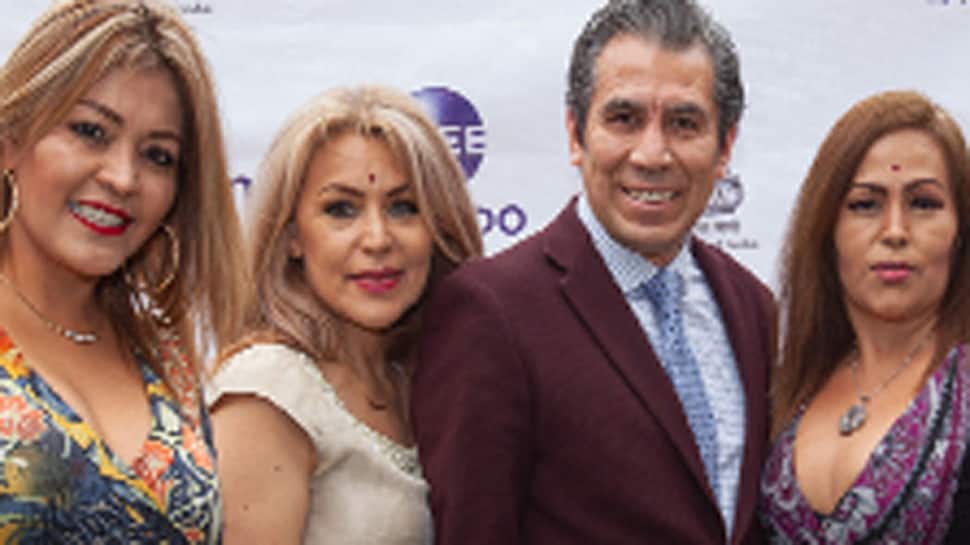 On Thursday, May 9th, the grand opening night of the 1st Indian Film Festival presented by the Embassy of India in Mexico and ZEE Mundo was houseful! ZEE Mundo kicked off a month-long film festival to be conducted over 4 weekends, with the movie Dangal – El Honor dubbed in Spanish.

This free to attend film festival is proving to be unique in many ways! This is the 1st time that ZEE Mundo collaborated with the Embassy of India in Mexico to showcase unique and entertaining content to the Spanish speaking population. Almost all the attendees had not heard of Aamir Khan before! And about 90% of them had never seen a Bollywood movie.

The opening night saw a big crowd of people and was attended by Mexican Influencers, media, embassy guests and the general public.

All the guests were greeted with ZEE Mundo souvenir bags, bindi, hand fans and were treated to Indian food and cocktails with some light Indian music playing in the garden. After the media interactions and photographs - everyone walked into the auditorium for the inauguration.

The Ambassador of India to Mexico - Mr Muktesh Pardeshi and ZEE Mundo Head of Business - Javier Casella inaugurated the opening night by lighting the lamp which was followed by an Indian dance performance. Then Mr Muktesh Pardeshi stated how impressed he was to see that ZEE Mundo had a Spanish channel to cater to the entertainment requirements of the Hispanic people of United States and now they have a channel in Mexico too. He said, this year India will be the guest of honour country in FIL in Guadalajara – the largest book fair in the Americas (Nov-Dec) and ZEE Mundo will participate and provide content for this festival. He also said that today is just a beginning and this kind of festival will be repeated in Mexico City and many other parts of the country! And to watch these movies you don't have to come to the Embassy, you can even watch it from home at homely comfort. He concluded by wishing this festival and ZEE Mundo all the best!

ZEE Mundo Head of Business - Javier Casella said "It is an honour to join the Embassy of India in Mexico to hold this Festival. We have the presence of journalists from different media, representatives of SKY, personalities from the world of entertainment, and the general public. Dangal is based on a real-life story, which crosses borders. It is a reflection of the same problems that we have in Latin America. It is not a reality that only exists in India. ZEE Mundo is the first Bollywood channel in Spanish worldwide and Mexico is our largest Hispanic market in Latin America where we've had the best acceptance of ZEE Mundo by our Pay TV customers and subscribers in general. This event is the first one we've held in this region. In the future, we will be doing other festivals in film networks, universities and in the FIL in Guadalajara. It is a way to bring our product to the public so they can get to know it and can enjoy it on SKY channel and soon on another Pay TV in Mexico, thus covering the whole country "

Sameer Targe, CEO - ZEE Americas said "We are very delighted & thankful towards the Ambassador of India to Mexico, Mr Muktesh Pardeshi to join hands for this wonderful cause of spreading Indian Cinema and culture to Mexico. ZEE Mundo has been a very successful experiment for the Spanish speaking population in the Americas wherein the Indian movies and series were dubbed in Spanish. The Spanish speaking population in America is loving the Indian storylines and narratives which are unparalleled and unique to any other content in the world yet very similar to the Latin culture"

The movie Dangal El Honor was very well received by the audience. During the movie, the audience laughed, cried and cheered out! Chrystro, an attendee said that this was the 1st time he watched an Indian movie and it went beyond his expectations! Wedad, another attendee said she had tears in her eyes in the end and she felt really good watching this movie and that she loves Indian dresses and the culture” While the film ended around 9 pm, the garden of the Embassy was full of the attendees continuing discussions and giving interviews. People enjoyed Indian dinner followed by a short opera performance. There were all sorts of emotions and they left wanting more!

Not only did the opening night of the ZEE Mundo Indian Film Festival sparks great conversations but it also set the expectations for the films and festivities planned for the upcoming weeks!

Chennai Express will premiere this week followed by Dil Dhadakne Do and English Vinglish.

ZEE Mundo is available on SKY, MEGACABLE and on the APP ZEE MUNDO PLAY www.zeemundo.com