In tonight’s episode, VIbhuti wakes up in the morning and does his work while singing. He tells Angoori that he needs to complete the process of being with the people in the office. 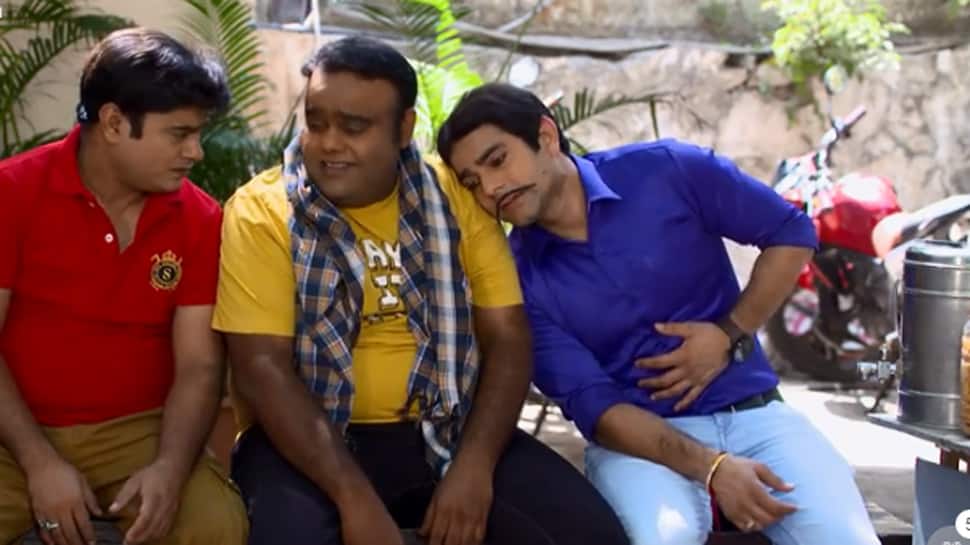 New Delhi: In the episode, Angoori notices that Vibhuti gets angry when red things around. She tells this to Tiwari and Happu Singh. She asks Happu to wear red bridal wear and check Vibhuti's reaction. When Happu Singh dons red bridal wear, Vibhuti kidnaps him.

Angoori gets there on time and cures Vibhuti of the bull curse.

In tonight’s episode, VIbhuti wakes up in the morning and does his work while singing. He tells Angoori that he needs to complete the process of being with the people in the office. Anu is impressed by Vibhuti’s singing and asks him to teach her. However, Vibhuti refuses to do so.

Angoori is watching the movie Padosan. She tells Tiwari that she also wants to learn South Indian Classical Music. Tiwari refuses to let her do so. Vibhuti overhears this and imagines teaching Angoori classical music in a garden and sings a song in his mind. He decides to go as a South Indian music teacher and teach Angoori.

When Angoori sees the music teacher she is excited. He calls himself as Darling and asks Angoori to call him that too. Tiwari refuses to let Angoori learn from him. Angoori calls up Amma who scolds Tiwari and asks him to make sure Angoori learns music. Vibhuti charges Rs. 5,000 per lesson from Tiwari for the music lesson.

Tika, Tilu and Malkhan are at a new tea stall. They ask for free tea and biscuits but don’t get any. They plan to steal food from tea stalls to pay for it. Saxena is nearby and he hears this. He pays for their tea and invites all three of them for a lavish dinner. What has Saxena planned for Tika, Tilu and Malkhan? Stay tuned to find out.

'Kumkum Bhagya', July 16, preview: Will Pragya be able to save Abhi and Prachi?