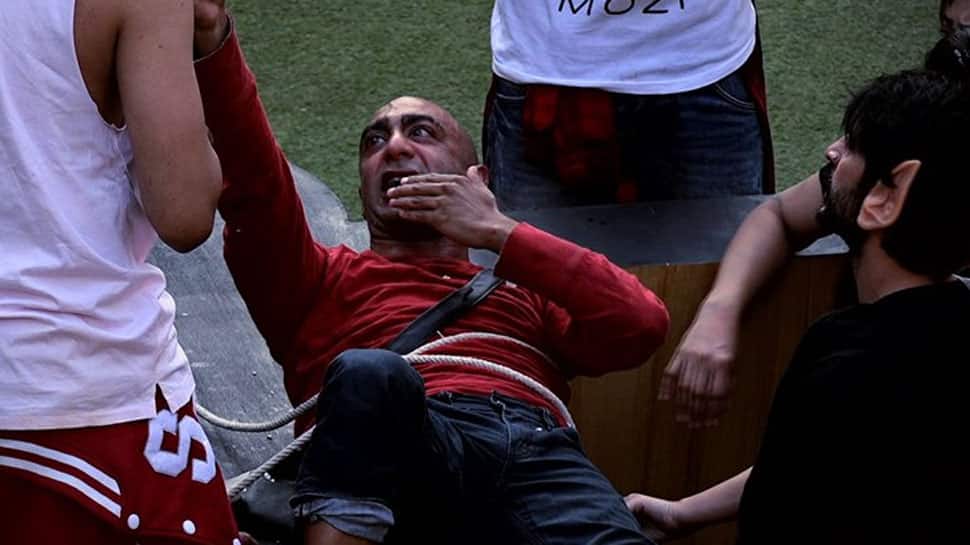 Today, Puneesh, Bandgi, Hiten and Shilpa become little dwarfs and are tasked with torturing the giants Hina, Luv, Akash and Arshi. Lovebirds Puneesh and Bandgi are all set to take their revenge after all the torture they had to endure on the first day of the task.

Hiten, who is often silent finally loses his cool when he notices Luv hiding all the trimmers. Vikas, Puneesh and Bandgi stand strong by Hiten’s side as he lashes out at Luv for touching his personal belongings without his consent.

Today’s element of surprise will be brought in by Akash Dadlani.

Hiten Tejwani, Shilpa Shinde, Bandgi Kalra and Puneesh Sharma are hell-bent on torturing Akash. They are seen waxing his head, stomach and legs after tying him to a platform. They are also seen rubbing garlic on his body. This causes severe allergic reactions on his skin and his face ends up swelling. Sanchalak Vikas Gupta intervenes and asks them to stop torturing him, but the Daanavs don’t pay heed. His motive of being the best performer and next captain keeps him going through all the torment bestowed upon him.

Luv, on the other hand, is also very ruthlessly bullied by the dwarfs. Karma comes back to him as he has to sacrifice his beloved hair for messing with Puneesh’s hair. Puneesh keeps using the trimmer till Luv is more than half bald! Also as Luv tries to protect his hair, Bandagi uses waxing strips and makes sure that not even single strand of hair is visible on Luv’s body.

It is time now for Khiladi Hina to show off her determination and strength but Bandgi has set her eyes on a bigger prize! In a move to avenge the chilli powder move, Bandgi decides to chop off Hina’s precious locks. But there is a lot that is yet to be done in this task.

Which team will win the luxury budget task? We will have to wait and watch tonight’s episode.