Discover the 'Flaw' some side of your favourite movie stars as they put their BQ to Test!

Premiering on 5th October, Movies-Masti with Maniesh Paul will air every Saturday and Sunday at 9:30 PM only on Zee TV. 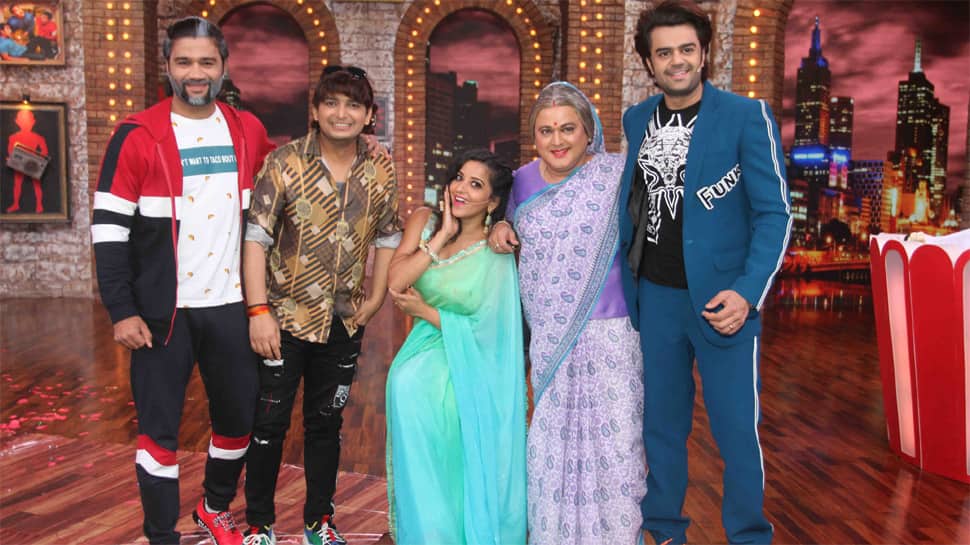 How often have you blushed and said 'Main Apni favourite hoon' or hit yourself on the head in a fit of rage, shouting 'Ata Majhi Satakli'? There is no denying that we, as Indians, worship Bollywood. Well, it's about time we celebrate our passion for movies and have a li'l masti while we're at it!

Zee TV is all set to introduce its latest offering - a first-of-its-kind light-hearted Bollywood game show 'MOVIE MASTI WITH MANIESH PAUL'. Hosted by the inimitable Maniesh Paul – one of the most versatile actors and acclaimed anchors of India and a crazy, quirky, Bollywood-obsessed family inspired by every Hindi movie stereotype, the show will unravel the unseen, unscripted and 'flaw'some side of Bollywood celebrities by subjecting them to tricky tasks, fun games and filmy quizzes that put their BQ (Bollywood Quotient) to test!

Each week, this one-of-a-kind Bollywood game show will bring a jaw-dropping list of four big-league B-town celebs ranging from Akshay Kumar to Ajay-Kajol and Sonam Kapoor to Janhavi Kapoor, to team up with their specially selected fan to win the game. Co-produced by Essel Vision Productions Ltd and Lil Frodo Productions, the show will premiere on 5th October 2019 and will air every Saturday and Sunday at 9:30 PM on Zee TV.

Interrupting Maniesh every step of the way as he plays the game with the movie celebrities and the contestants will be this mischievous, Bollywood-crazy family of roasters and pranksters -  a motley of filmy characters ranging from a melodramatic Maa - played by Ali Asgar, a naughty, seductive padosan called Chandni Bhabhi played by the beautiful and talented Monalisa, comedian and actor Paritosh Tripathi as Komal Ponge, a wheeler-dealer of a manager and a villainous-father called Rajkumar, played by Balraj Sayal.

Zee TV Business Head Aparna Bhosle said, “It is our constant endeavour to offer our audience's content that cuts across varied genres and perhaps the only ingredient that had gone missing from our mix for a while was comedy. So, our next weekend primetime offering is a comical game show that celebrates every Indian's obsession with Bollywood. What audiences often get to see on chat shows is an almost rehearsed, perfectly thought through, filtered version of their favourite celebs. Instead, on Movie-Masti with Maniesh Paul, the idea is to present our viewers with candid moments of excitement, behind-the-scenes banter between celebs as they let their hair down, team up with their biggest fans and bring out their competitive streak to prove that their knowledge and passion for movies is truly unmatched. With talents like Maniesh Paul, Ali Asgar, Monalisa, Balraj and Paritosh coming together on a platform – each with sparkling wit and comic timing, this one is bound to be a laugh riot while bringing viewers an all-new side of their favourite celebrities.”

Commenting on his association with the show, Host Maniesh Paul said, “I go back a long way with Zee TV, having hosted DID L'il Masters and a number of award shows on the channel. It has always been a great experience to be associated with Zee TV and when they approached me with this interesting concept, it was an offer I couldn't refuse. The show is a celebration of all things Bollywood and our collective passion for the movies as a nation. I was hooked to the idea right since the producers and creative team narrated it to me. In fact, it's a treat to a Bollywood buff like me and I am thrilled to not only host it but also get to test the Bollywood quotient of some of India's hottest movie stars. Audiences are in for a treat as they will see their favourite stars just let their hair down and have a ball, trying to win the game show joining hands with their biggest fans. I see it as an entertaining, family game show that will keep you at the edge of your seat.”

Talking about the show, Ali Asgar said, “I have always been a fan of old, black and white, Hindi movies. Being a fan of the genre, I am more excited to participate and beat my colleagues in the games that will be played on the show. My role is unique and with a host of talented actors on the show, I am eagerly looking forward to the shoot. I believe in working with newer teams and different artistes.”

Actress Monalisa who will be making her debut into the genre of comedy with this show said, “The concept is new and refreshing, nothing that I have come across or worked on before. The format of the show looks very interesting and its great working with such experienced and talented actors. I think it will be a unique and entertaining experience for us and the viewers of Zee TV. I hope my fans love and support me in this new venture.”

A fan of his new-found mad family on the show, Paritosh said, “I am not a fan of a monotonous lifestyle or amongst those who believe in spending their lives through a process of eat, sleep, repeat. Madness, I believe, is important because most crazy minds are the ones to take the risk of being creative and learn new things in life. So, we are creating a crazy, new, filmy show and I am excited to be a part of this talented gang.”

Taking inspiration from all the bad boys of Bollywood, Balraj Syal said, “I look forward to being a part of the show and working with Maniesh. I am confident that the audiences will like this game show peppered with masti. I want the viewers to realize that this is a fresh concept on television and they are in for an evening of fun, excitement and nail-biting moments on Zee TV.”

ZEE's digital entertainment destination ZEE5 takes the comedy and entertainment quotient of the show a notch higher by launching interactive gamification called Movie Masti Khelo Live. As part of this gamification, viewers sitting at home can also play the game on ZEE5 app. The audiences just have to log on to ZEE5 when the show is live and answer the questions coming on the show on the app. At the end of the show, one winner with maximum points will be gratified with shopping vouchers worth Rs 10K per episode.

In addition to this play-along feature with the TV show, people can also participate in a daily Bollywood quiz on ZEE5 from Monday to Friday and win additional prizes.

So, if you call yourself a movie buff, literally worship the ground that your favourite movie star steps on, know every detail about even their least popular films, then it's about time you celebrate your passion for movies and have a li'l masti while you're at it!

Premiering on 5th October, Movies-Masti with Maniesh Paul will air every Saturday and Sunday at 9:30 PM only on Zee TV.