Discover unpredictable and witness the breeze of romance as &PrivéHD premieres Juliet, Naked

Feel the other side of life's blessings in disguise as &PrivéHD, the premium destination for nuanced cinema, premieres the refreshing romantic comedy, 'Juliet, Naked' on Saturday, September 7, 2019, at 1 PM and 9 PM 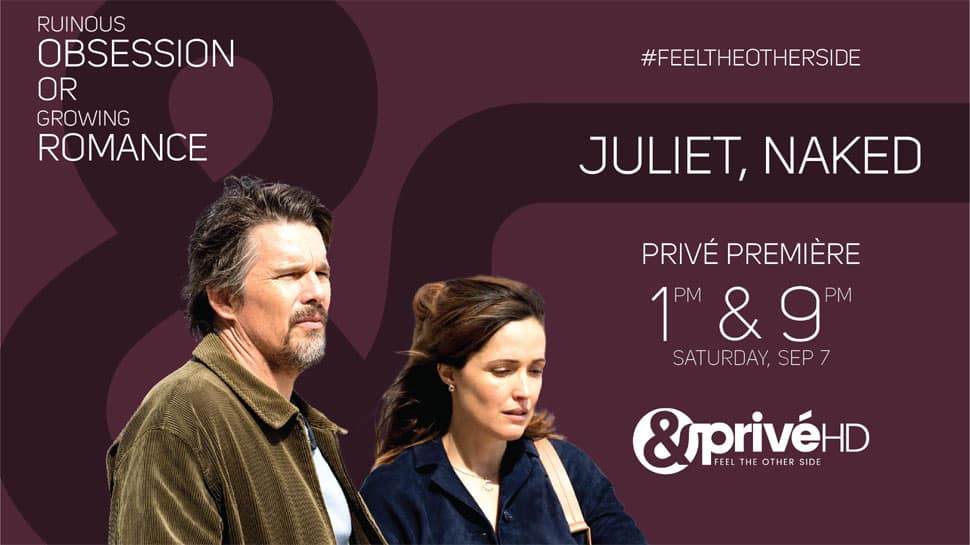 Life is full of surprises. Sometimes, one man's obsession could be another's expression. Sometimes, a bitter truth could spark a sweet romance. A story rife with love and laughter, Juliet, Naked is a movie that truly testifies the fact that when one door closes, another opens. Feel the other side of life's blessings in disguise as &PrivéHD, the premium destination for nuanced cinema, premieres the refreshing romantic comedy, 'Juliet, Naked' on Saturday, September 7, 2019, at 1 PM and 9 PM.

The film revolves around the life of Annie (Rose Byrne) who finds herself in a claustrophobic long-term relationship with beau Duncan (Chris O'Dowd). Turns out, the estranged couple have polarising priorities. While Annie is a charming yet a lone, young woman, Duncan, on the other hand, harbours a deep obsession with a cult rocker of the early '90s named Tucker Crowe (Ethan Hawke). Flashback to the 90s, an indie rock sensation, Crowe who garnered a devoted following, vanished into thin air mid-way during his one of his performances, leaving fans perplexed. Cut to present, when the news of his hit record from 25 years ago surfaces, Duncan's obsession reaches newer heights of insanity damaging his relationship with Annie. As fate would have it, Annie and the Rockstar himself, Crowe, cross paths in the most life-changing encounter. What follows is a beautiful tale of romance and reunion in a comic turn of events.

Will Annie embrace the second chance that life has to offer or will she give in to her past?

Experience a rush of romance that will leave you hoping for more as Juliet, Naked is all set to air on September 7, 2019, Saturday at 1 PM & 9 PM only on &PrivéHD